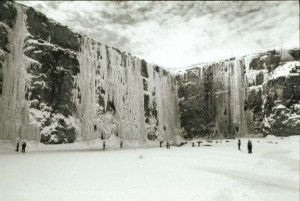 Ice climbing in Green Bay?  Yeah that’s what I thought too….until I walked into the quarry and saw the motherload of all ice climbs!  One hundred and ten foot vertical walls provide an almost instant pump for climbers that tie in.  What better way to get in shape and fired up for the Michigan Ice Fest then to spend the weekend ticking off routes at the pit!

Paul started by contacting a couple of regular Ice Pit climbers, wondering if there was any interest in forming an ice climbing co-op or club to take over the Ice Pit. Those people contacted some of the other regular climbers from previous years.  They found that there was a general interest to keep The Pit alive, and try to make that great climbing spot available for the years to come, and improve on what was already started.  A small committee was formed in the Fall of 2003 to make it happen. Don Anderson represented the Northern Wisconsin climbers and Parimal represented the Illinois and Milwaukee Climbers in gathering information. Ron Long became our technical adviser with his years of experience in climbing, and setting up at The Pit.  Gina Vendola helped hunt down waivers, liability rider insurance, and gave another point of view.  Costs were nailed down: liability insurance, leasing the quarry, ropes & equipment, maintenance, state application fees, attorney fees (case of beer) and others.
Members would be entitled to one vote, and the organization would be non-profit.  The organization would own all equipment.  Everyone would be asked to contribute both financially and with time:  pitching in on climbing days, Pit maintenance, or serve as a board member at some time.

That first year (Winter 2003-2004) the Midwest Ice Climbers, Inc. was born, and operated informally under the direction of Don Anderson.   By summer 2004 we recognized the need for a more formal structure, and elected our first board of directors with Ron Long as President.   The 2004-2005 climbing season saw organized work days and climbing days help, with members pitching in as their time and other commitments allowed. Now, we have a strong membership committed to further improvements in The Pit. 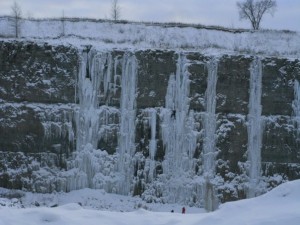 The members of the Ice Pit have created this weekend to share their passion of ice climbing and to introduce climbers from all over the midwest to the spectacular climbs available at the Ice Pit.  No experience is necessary- there will be demos available and all climbs are pre set on top rope.  All you have to do is grab some friends and head on out to the pit! 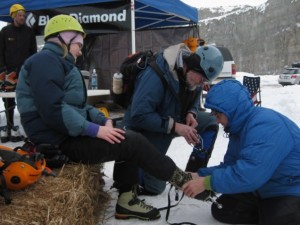 We’ll also have  the Access Fund, the American Alpine Club and more!

After the climbing is over on Saturday come to the Ramada Inn, for the after party.

Stay at the Ramada Inn and ask for the special Midwest Ice Climber rate.  Leave your car there and take the free shuttle to and from the climbing.

For more information on the Ice Pit and Festival please visit: The Ice Pit