Reinhold Messner himself has called Steve “The best high-altitude climber in the world today.” “Being called the best,” says Steve, “makes me very uncomfortable…. My intention is to be as good as I can be. Mountaineering is too complex to be squeezed into a competition. It is simply not something that lends itself to comparison. Climbing is about process, not achievement. The moment your mind wanders away from the task of the climbing-at-hand will be the moment you fail.”

Steve’s most (in?)-famous ascent occurred in September 2005. He and Vince Anderson pioneered a direct new route on the Rupal Face of 8126-meter (26,660-foot) Nanga Parbat. The 4100-meter (13,500-foot) face had never before been climbed in alpine style. During Steve’s 2004 season in the Karakoram he raised the standards of alpine climbing with his solo ascent of K7 via a new route in 41:45 hours (with 26 hours of nonstop climbing to summit) using no fixed ropes, no bolts, and only a seven-pound pack. It was the mountain’s second ascent.

“Recently, I have had a lot of attention focused on my climbs of K7 and Nanga Parbat. But I spent a lot of time and a lot of passion pursuing climbs in the Alaska Range, the Canadian Rockies, and the European Alps. In many ways I am most proud of these ascents.” These ascents include the first ascent of First Born on the Father and Son’s Wall, a solo first ascent of Beauty is a Rare Thing, and Mascioli’s Pillar, all on Denali. In the nearby Ruth Gorge, Steve, Mark Twight, and Jonny Blitz climbed The Gift on Mt. Bradley and with Kevin Mahoney and Ben Gilmore he opened The Leisure Tour on the east face of the Moose’s Tooth. But perhaps his most impressive climbs in Alaska were the 60-hour non-stop ascent of the Slovak Direct route on Denali’s South Face with Mark Twight and Scott Backes and the 25-hour ascent (plus 20-hour descent) of the Infinite Spur on Mount Foraker with Rolando Garriboti. Prior to these ascents, the fastest time for either climb was seven days.

“The Alps are a touchstone for me, largely because of the history. I am on an informal quest to climb the six great north faces.” So far, he’s done three: The Walker Spur on the Grande Jorasses (in winter), the 1938 route on the north face of the Petite Dru, and the 1937 Comici route on the north face of the Cima Grande in the Dolomites. “Its intensely mind-opening to be up there on these routes that were climbed sixty plus years ago, to be trying as hard as you can, with all the technological advantages and safety we have now. You realize that we’re not any better. More equipped and more resourceful for sure, but better? I don’t think so.”
“I have a long-held mission statement and that is to be the best climber I can be.” Steve writes, “But since working with Patagonia (since 1999) I would have to amend that. Be the best climber I can be, cause no unnecessary harm, and do my best to promote a business that inspires and implements solutions to the environmental crisis.” 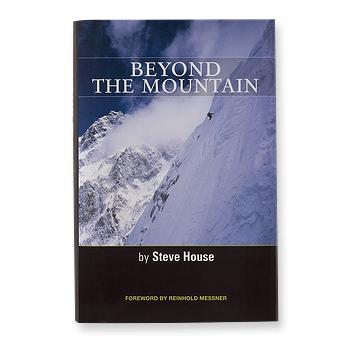 In September 2009, with Patagonia Books, Steve published his first book, Beyond the Mountain.

“I set out to build an honest, unflinching book. I told the stories without consideration of what self-appointed judges would think.  In this I have been rewarded. The book is doing well, having entered it’s second printing in just two months. As of December 2009 we have agreements for publishing rights in: UK, Ireland, Germany, Switzerland, Austria, Slovenia, and Italy”.

Beyond the Mountain won the Mountain Literature Award at the Banff Mountain Book Festival and the UK’s Boardman-Tasker Prize. The book will be available at Ice Fest, or from any number of booksellers including Patagonia.com, Chessler’s books, and Amazon.com where Beyond the Mountain maintains a 5-star rating by it’s readers.  You’ll also be able to pick up yhe book at the Fest!

A huge thank you goes out to Steve’s sponsor Patagonia, for sending Steve to this year’s event!