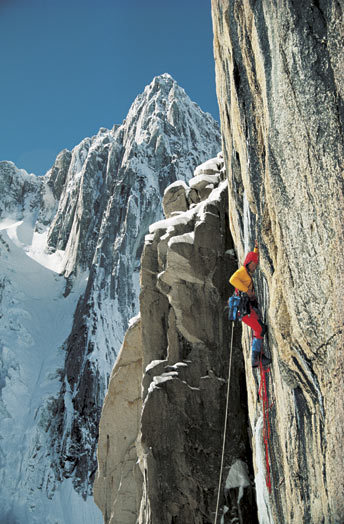 Who’s the one guy you can guarantee you’ll see at the fest?  Mark of course!  A long time supporter of the festival, Mark is considered one of the most proficient and diverse alpinist/rock climbers in the world. With more than 30 years of experience, he has accumulated a long resume of bold rock ascents, alpine solos, Alaskan climbs and Himalayan expeditions. Among his most notable climbs are the first American solo ascent of the Eiger North Face, a first ascent route on Nameless Tower, a winter solo of the Diamond on Long’s Peak and first ascents in Alaska’s Saint Elias Range.

“IF GOD DOES EXISTS, THEN HE MUST SPEND A DISPROPORTIONATELY LARGE AMOUNT OF

TIME ON THE WILFORD CASE”.

For those of you that are Ice Fest veterans, one thing that always sticks out is what characters some of the climbers can be, and Wilford is no exception.  Profiled in John Sherman’s book, “Sherman Exposed“,  Wilford’s accomplishments on the rock and antics off the rock are examined.  He has a passion for fast cars and that has given him the dubious record of surviving at least six automobile rollovers, although…… he claims he was only driving for five of them.

While Mark is not presenting this year, he will be instructing for us again this year and we are lucky to have him back!