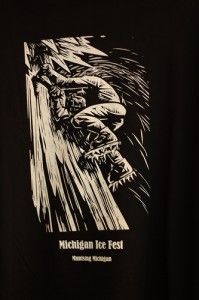 The 2012 Michigan Ice Fest is in the books and 337 participants were greeted with extremely mild temperatures and what turned out to be a lean ice year.   Eight different states were represented this year with participants traveling as far as Kentucky and Colorado- coming to Munising to enjoy the camaraderie of Midwest climbers and the chance to climb at Pictured Rocks National Lakeshore.  The big story this year has been the weather and the randomness of what climbs were formed.  Go figure…..the ultra classic Dairyland was in, but Memorial Falls was not, Sweet Mother Moses was in but Tannery Falls was not.

New this year, the  Fest started with an Introduction to Ice Course, and a Top Rope Anchor Course on Thursday where participants spent the day learning he tricks of the trade out at the Curtains. Many folks new to the Fest were excited to get out on the ice and a chance to climb the vertical pillars that are so common in the park.

We kicked off the festival on Thursday night with  the first ever “Participants Slide Show: Beers with Bill” while enjoying a tasty beverage climbers were treated to a collection of slides submitted by Ice Fest participants and set to music.

With temps still in the mid 30’s climbers hit the trails in search of ice.  Several groups headed out to Miners Lake Falls, Miners Beach area as well as being dispersed along the lakeshore trail.  The fest also saw an increase in rentals as many took advantage to check out gear and climb in small groups throughout the park.  Two more courses, an Introduction to Ice Course, and a Top Rope Anchor Course were filled and went out for a day of instruction and climbing. 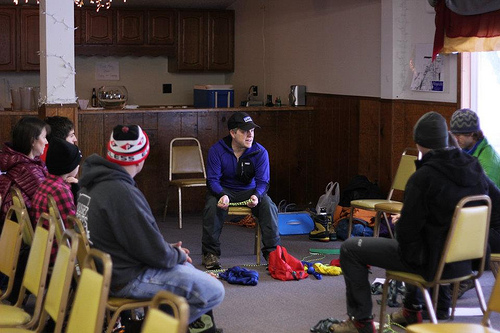 Friday evenings festivities started off with a climbing social and free beer sponsored by Ames Adventure Outdoors, Scarpa and Osprey.  Due to a family illness, Roger Strong was unable to make it to last years Fest, but fortunately for us Gold Sponsor Arc Teryx sent Roger out this year to instruct and present.  Roger thrilled the crowd with slides and video from his days as a crab captain on the first two seasons of the Discovery Channels Deadliest Catch, climbing ice bergs, ice routes in the northwest, and finally an amazing story of a serious ski accident he was involved in last year.

Because of a monster snowstorm in Colorado, perennial Ice Fest athlete Mark Wilford was unable to attend so our second slide show of the evening had to be cancelled.  The rest of the evening you could find people browsing the booths of Bob The Mountaineer and Down Wind Sports looking to score a few deals! 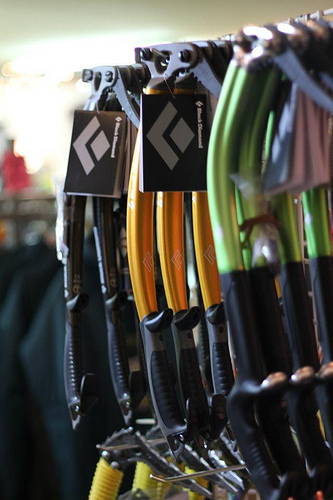 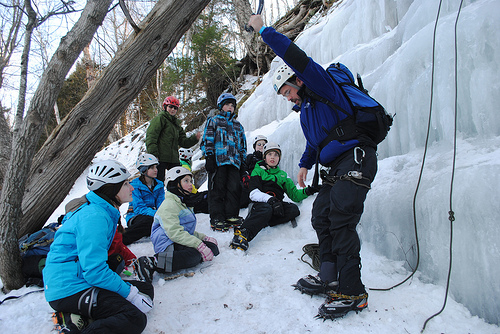 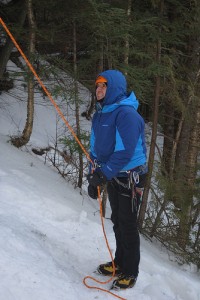 As usual we got the ball rolling early with equipment hand out for Ice Fest Courses.  The Intro to Ice, Lead climbing, Women’s Intro to Ice and the Kids courses all filled up fast and participants were treated to instruction provided by Roger Strong, Barry Blanchard, and Vince Anderson.  After getting the courses set and on their way it was time to hook up participants with demo gear.  This year the line to pick up gear was exceptionally long running down stairs and winding through the restaurant.  For the first time in Ice Fest history we were able outfit everyone who showed up to demo gear!  All of our demo sponsors really stepped up this year by sending larger demo kits and it was certainly appreciated!

The Demo area at the Curtains also saw changes this year with a shortage of ice to climb.  Most years we are able to hang ten ropes for participants to climb….this year we squeaked by with five ropes.   Hundreds of climbers were challenged throughout the day with a variety of difficult climbs set up.

After a long day of climbing, everyone converged upon Sydney’s for the Saturday evening social and free beer provided by La Sportiva.  With a standing room only crowd, our first presentation of the evening was from Vince Anderson. In 2005, Vince, along with Steve House pioneered a direct new route on the Rupal Face of 8126-meter (26,660-foot) Nanga Parbat. The 4100-meter (13,500-foot) face had never before been climbed in alpine style and their alpine-style ascent is one the boldest Himalayan ascents to date.  Vince’s humor, delivery, and  passion in telling this remarkable story was inspiring and had the crowd in awe.  A huge thank you goes out to Gold Level sponsor Patagonia for sending Vince to the Fest! 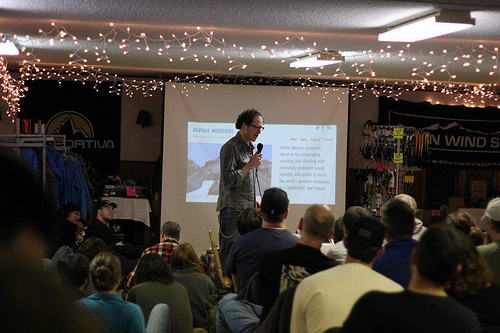 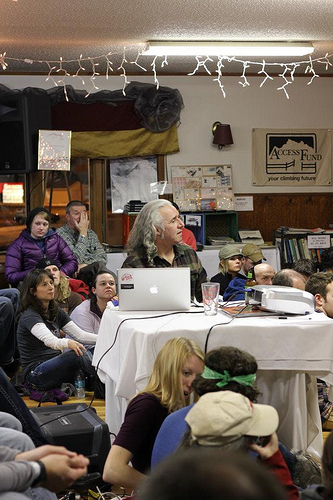 Our final presentation of the night was from Ice Fest favorite Barry Blanchard.  A fantastic story teller, Barry reminisced about past climbing partners, including Kevin Doyle and Guy Lacelle -really hitting home on what makes a special climbing partner/friend.  Many beautiful slides showed classic Canadian Rockies routes that were pioneered by Barry and his friends.  The highlight of the presentation for many was Barry giving the insider details on his work as a climbing adviser and safety rigger on a number of Hollywood films including Cliffhanger, and Vertical Limit!

After the shows we introduced Sommer Edwards and Izabella Tancredi as the 2012 Sue Nott Scholarship winners.  Down Wind Sports has created the Sue Nott Scholarship with the purpose to promote, inspire, and introduce young females to the sport of ice climbing. The girls had to submit a letter of why they wanted to participate, a letter of recommendation from someone other then their parents, and their report card.  Sommer and Izabella were selected from the largest group of girls ever to submit applications and were provided with free entry into the fest and the Women’s Intro To Ice Course.  Way to go girls! 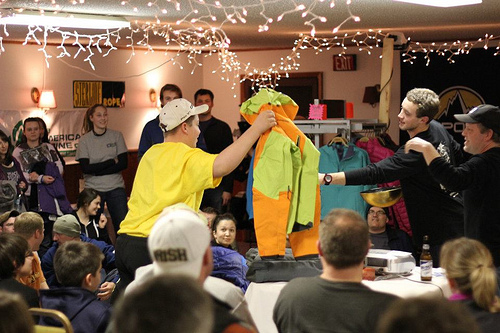 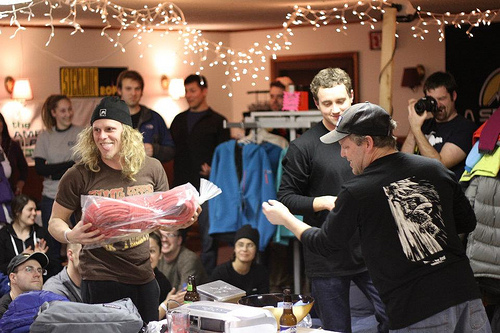 As usual the evening concluded with the Michigan Ice Fest raffle where we gave out over $4000.00 of gear and clothing to some very excited climbers.  Soft shells, belay parkas, BD Stinger Crampons, Sterling and Petzl ropes, Osprey Packs, and La Sportiva Nepal Evo ice boots were only a few of the items raffled off!  A big shout out to Patagonia, La Sportiva, Mountain Hardwear, Sterling, Black Diamond, Petzl and Osprey for providing such killer raffle prizes! 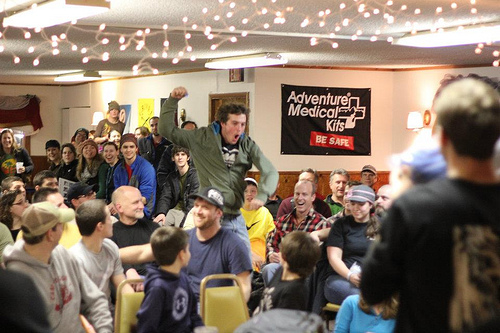 More mild temps greeted our Intro to Ice  and Intro to Leading participants which made for comfortable classes all day long.  The effects of climbing hard all day Saturday and a late night of socializing must have took it toll on climbers as the demo area was a very laid back all day Sunday allowing climbers their choice of routes for most of the day.

All in all it was another great Michigan Ice Festival and we appreciate all of the patronage we get from Midwest climbers.  We are proud to say that over the weekend we were able to sign up 31 new members to the American Alpine Club, and the Access Fund  and exposed hundreds of first time climbers to the sport of ice climbing. 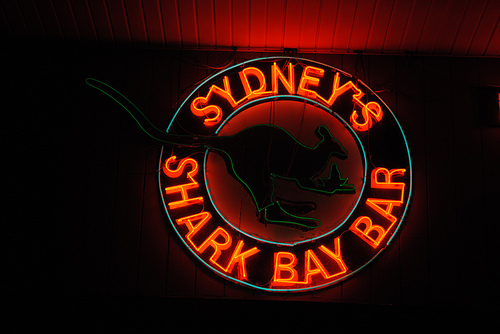