FITS Sock Co. products are designed to be the best fitting performance outdoor socks in the industry.  Over 100 years of experience has taught us to recognize the importance of careful, precise sock-fitting based more on total foot volume than foot length.  All FITS™ socks deliver unique benefits – thanks to superior construction, the highest quality materials, and innovative design.  Our socks are constructed from two-ply, compact-spun, ultra-fine Merino Wool, providing the ultimate blend of softness and durability.   Our F3 Technology™ delivers a unique form FIT thanks to a deep heel pocket, specialized toe seam, and contoured leg – which keep FITS socks firmly in place.  This means no more bunching, hot spots, or friction, regardless of the task at hand. Best yet these are American made socks! 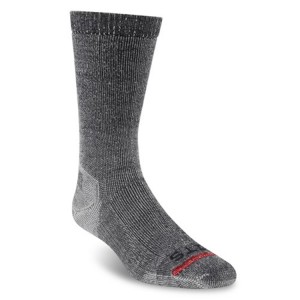 Our staff has been climbing in these socks this winter and we absolutely love them!  Don’t miss out as we have a few surprises planned for FITS at Ice Fest- including FITS socks for Ice Fest participants!