Not every gear company can claim that they have a 200 year manufacturing history but Italian innovators Grivel has been doing just that. To celebrate, Grivel is going all out by sending Italian climber Angelika Rainer to instruct and present at this years fest as well as offering an amazing raffle opportunity out of their booth at the Michigan Ice Fest Headquarters.  Stop by the Grivel booth anytime during the fest and when you make a purchase you will automatically be entered into a drawing for a Mont Blanc Piolet and a Grivel Retro Rucksack!  Drawing will be Saturday night!

One crisp morning in the late 1800’s, a young Italian hunter stepped into a blacksmith shop at the foot of Mont Blanc with an odd request. He explained that he had been hired by English tourists to assist them with finding a passage to the top of the nearby mountains, and that they were in need of a unique metal tool: a pick but lighter and longer than usual with a sharp flat part that could be used to cut steps into the ice. The blacksmith went to work expanding on his skilled knowledge of smelting metal. He was able to craft a modification from a common farming tool creating the first dedicated ice axe. As news of the success of these unusual tourist spread so did the legend of the tools that were used to conquer this once formidable terrain. 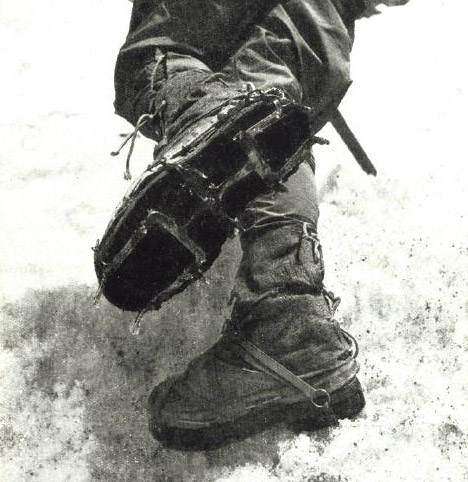 Skepticism of the effectiveness of these new ‘ice axes’ quickly transformed to awe as more tourists traveled to Italy to witness the young blacksmith, Henry Grivel, hammer and forge red hot metal into elegantly efficient tools for the mountaineering tourists. One of these such travelers was a young English mountaineer and engineer named Oscar Eckerstein, who presented Henry with a schematic to create a leather strap bound crampon he dubbed the “Ice Claw.” The creation of this more modern crampon was an immediate success, garnering a revolution and surge forward in recreational mountain climbing.

As more faith was placed in these new tools, a separation between mountain climbing, ‘for fun’, rather than necessity, began to take hold. These bold new tourist began to be referred to as ‘Alpinists’ and the Grivel family embraced this new recreation adopting a new business model; in winter they would continue the traditional jobs of blacksmithing for the locals, but in the summer, they began to refer to themselves as ‘producers of equipment for alpinist’.

The mountaineering revolution had begun and new technologies gave high quality results: peaks were bagged and business was good. But there still seemed to be something missing. It was Laurent Grivel, mountain guide and Henry Grivel’s first son, who added two front points to a pair of crampons. This allowed one to maneuver on steeper and harder gradients. The 12 points crampon was born in 1929. It wasn’t just a matter of progress with materials but a change in philosophy, daring those when facing difficulty and steep terrain to be able to face it straight on. The new style was quite controversial (front pointing vs. cutting of steps and side stepping) until the last unsolved route of the Alps, the North face of Eiger was successfully climbed (Heckmair, Vörg, Harrer, Kasparek, 1938) using the front pointing technique with 12 point style crampon.

The Grivel family pushed the revolution once again in 1933 when Henry’s other son, Amato Grivel, used a steel alloy to create an unheard of 360 gram crampon. This modern, lightweight crampon was achieved through the blacksmith’s ‘old world’ technique of hot forging the alloy (uniformly aligning the steel carbons, essentially ‘ironing out’ the metal to be thin but still extremely strong). This hot forging technique is still employed in Grivel steel manufacturing today.

From the humble beginnings in a smoky blacksmith shop at the base of Mont Blanc 200 years ago, man’s pursuit to brave benevolent mountain ranges and push up awe inspiring pitches of water ice continues to stoke the fire of creativity for alpine tools. Now in its 7th generation of producers of alpine equipment the Grivel family still forges the way. We are still just tourist visiting beautiful and sacred spaces on this shared planet. The mountains are neither hostile nor an outright enemy to man, but their benevolence can become dangerous when conditions of cold, darkness, weather or even exhaustion compound upon you. It is worth mentioning that despite the advances of access, hand-held beta and mountain equipment, we should always approach the mountains with humility and a tread lightly attitude. Think of those that have traveled through before you, and also of those that will come after you. Strive to be smart and safe out there so you and your tools may return to share the tales of adventure and to explore another day! 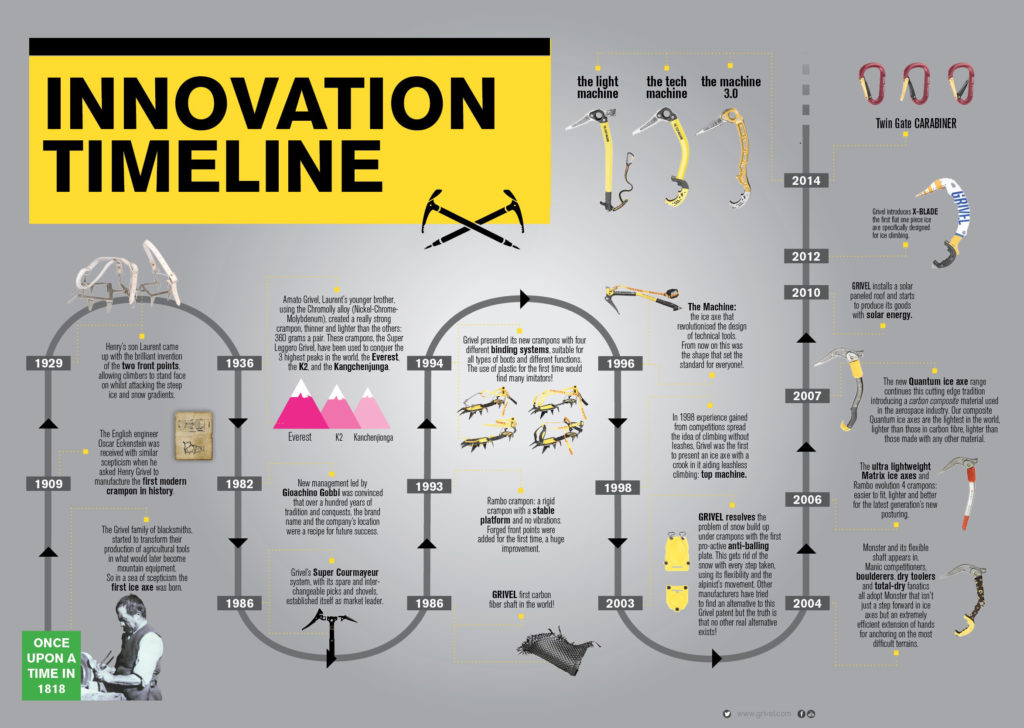