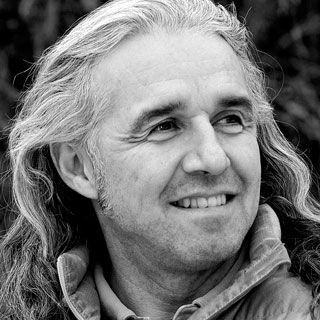 Canadian Mountain Guide and alpinist, Barry Blanchard, was born in Calgary, March 29, 1959. Twelve years later three boys navigated the Bow River through the western side of the city on a raft of nailed together railway ties, Barry was at the helm steering the adventure. He found mountain climbing in the books of his high school library, some of which are still in his possession. A six month trip to the French Alps in 1980 set the course of Barry’s life: to climb the steepest and most complicated faces of the world’s great glaciated peaks. Barry has enjoyed some success: the first ascent of The Andromeda Strain, 1983; the North Ridge of Rakaposhi, 1984; the first ascent of the apocalyptic North Pillar of North Twin; the West Ridge of Mt Everest, 1986; surviving the Rupal Face of Nanga Parbat, 1988; a solo first ascent on the North Face of Kusum Kanguru, 1991; an attempt on K-2, 1993; first ascents in the St Elias mountains; M-16, a first ascent -in winter on the East Face of Howse Peak, 1999; the third ascent of the Infinite Spur on MT Foraker, 2000; the first ascent of Infinite Patience on the Emperor Face of Mt Robson, 2002. More importantly Barry has enjoyed all of his outings, even
the ones not included in the narrow definition of “success”. Barry moved to the mountains in 1982 to pursue his Mountain Guiding career (he is an internationally certified -UIAGM- mountain guide) and has included making Hollywood features such as “K-2”, “Cliffhanger” and “The Vertical Limit” in his professional life. His climbing memoir The Calling, a Life Rocked by Mountains won the 2015 Boardman Tasker Prize for Mountain Literature at the Kendal Mountain Festival in Britain. Barry is an honourary member of the Alpine Club of Canada and winner of the 2002 Summit of Excellence Award at the Banff Mountain Festival. Barry is proud to be Métis and seventh generation descendent of Cuthbert Grant -Warden of the Plains, Captain of the Buffalo
Hunt and Leader of the Métis at the Battle of Seven Oaks. Barry lives in Canmore, Alberta, with his partner Nicole and his two young daughters.