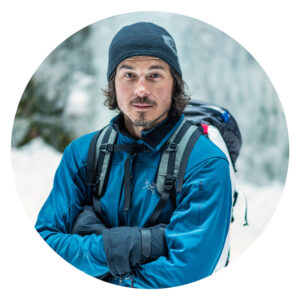 Dustin began climbing in 1996, and has been in and around the climbing and outdoor industry ever since. Dustin was co-owner of the retail store Hansen Mountaineering, and co-founded the Serac Mountaineering Club, which trained members in all aspects of climbing and mountaineering safety and techniques. The club ultimately grew to hundreds of members and took people all over the world to climb big mountains in Mexico, South America, Europe, and Asia.  Dustin was one of the original organizers of the Wasatch Ice Festival, an ice festival that ran from 2001-2004 and drew thousands of participants from all over the Intermountain West and athletes from all over North America. Due to his love for ice climbing and the emergence of ice climbing competitions, he also designed and farmed ice climbing towers, locally in Midway, Utah. In 2021, with business and climbing partner Susan Sims he opened a dedicated drytooling gym in Orem, Utah called The Scratch Pad, where he coaches members of the U.S. National Ice Team including the current U16 World Champion. Dustin is a valued member of the local ice climbing community, and is passionate about bringing people together and building community and continuing to search for fun new FA’s.

Dustin climbs ice frequently along the Wasatch Front and lives only 7 min from some of the best ice and mixed climbing in Utah. Dustin also frequents many of the prominent ice climbing areas throughout Utah, Colorado, Wyoming, Montana, etc…  where he has climbed several hard test pieces to WI6 and has developed new trad, and mixed areas. He has summited several peaks including Mt. Rainier, Grand Teton, Mt, Whitney, Pico de Orizaba, and Denali.