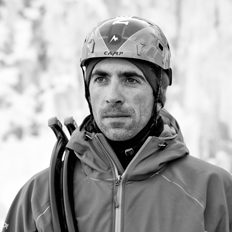 Fabrizio Zangrilli is a very talented high altitude mountaineer and seasoned expedition veteran, who mixes traditional big mountain objectives with modern fast and light tactics. He works as a guide and has a soft spot for the Himalayas.

Fabrizio was born in South Africa, but has lived in Europe half of his life and has been based in Colorado for almost 30 years. After getting the climbing bug as a teenager he progressed to alpine rock and ice in later years.

Since then he has amassed a wealth of experience in expedition climbing, to the point of leading a semi-nomadic lifestyle with regular long periods away in the mountains. One of his central tactics is that ‘speed is safety’ in the mountains and this has led to some impressive ascents and achievements. His ‘fun’ day on K2 moving from Base Camp (5100m) to Camp 4 (7600m) and back again in a 36 hour push, is just one example.

Fabrizio has now made 50 expeditions to the classic (Patagonia and Nepal), and some less classic (Africa and Antarctica), mountain destinations. Quantity is no substitute for quality however and Fabrizio has more than a few first ascents to his name. His route on Mount Huntington’s Phantom Wall was listed by Rock & Ice as one of best 100 routes climbed in the 25 years since it was first published.