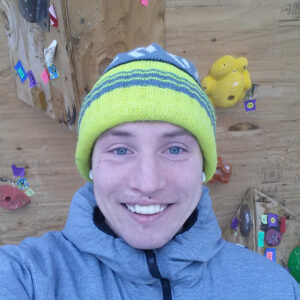 This past season Kevin competed in the 2022 Ice Climbing World Championships held in Sass Fee, Switzerland where he finished 14th overall in the Lead competition, and 8th overall in the combined Speed/Lead event. Prior to this, he finished 2nd in Lead at the European Cup held in Slovakia, as well as 5th in lead the following weekend in the Czech Republic. Kevin is currently the 2022 North American Ice Climbing Speed Champion and runner up in Lead.

Most recently Kevin returned from a climbing trip to the Dolomites, Italy where he became the third American to climb D15 by completing a route called “A Line Above the Sky”. Kevin was able to finish a handful of other routes while in Italy including “French Connection” D15-, “Je Ne Sais Quoi” D14+, along with three other D14’s, a D13+, and another classic D12.

Originating from Wisconsin, Kevin currently resides in Bozeman, MT where he trains year round preparing for the winter season. Kevin has ambitions to help grow the sport of mixed climbing in the community, as well as to start a youth Ice Climbing team to help share his passion for the sport and get the stoke high for the future generation of crushers! When not climbing you will often find Kevin juggling his ice tools or enjoying large quantities of coffee!