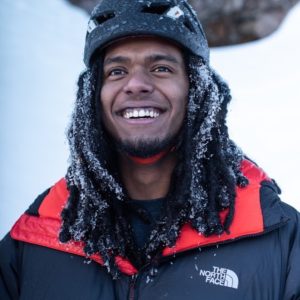 Manoah Ainuu was born in Los Angeles, but his family moved to Spokane, Washington, when he was young. It was there he became interested in rock climbing at age 16 and, through that sport, became a fan of the outdoors. It wasn’t until he headed to college in Montana—“an outdoor mecca”—that Ainuu “fell in love with everything about climbing. Overcoming pain and fear, spending time in beautiful places, being part of this sport’s awesome community … it just clicked,” he says. Fast forward five years, and he’s earned a spot on The North Face’s team of elite climbers, taking on daring expeditions in big mountains around the world. As much as he loves pushing his limits in remote, demanding locales, Ainuu is equally stoked to introduce people to the sport. “I share what I love,” he says. “Especially when it’s something that is so fun and can help you grow.”