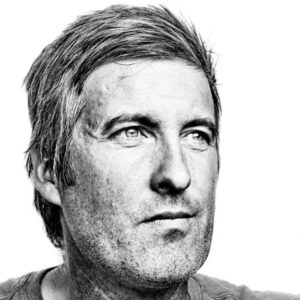 Mark Synnott, 49, is a pioneering big wall climber, writer and prolific adventurer. His search for unclimbed and unexplored rock walls has taken him on more than 30 expeditions to places like Alaska, Baffin Island, Greenland, Iceland, Newfoundland, Patagonia, Guyana, Venezuela, Pakistan, Nepal, India, China, Tibet, Uzbekistan, Russia, Cameroon, Chad, Borneo, Oman and Pitcairn Island. One of the first climbers to explore Baffin Island’s remote east coast, Mark has been on five trips to the island, and has pioneered four big wall first ascents on the east coast, including a grade VII on the 4700-foot north face of Polar Sun Spire — an epic wall that required the team to spend 36 nights in portaledges. In Auyuittuq National Park, Mark completed the first ski descent of the South Face of Mt. Odin via a 5000′ couloir. In Pakistan’s Karakoram Mountains, Mark established two grade VII big wall first ascents — The Ship of Fools on Shipton Spire and Parallel Worlds on Great Trango Tower. The latter, a 6000-foot wall topping out over 20,000 feet is one of the longest rock climbs in the world. Closer to home, Mark has climbed Yosemite’s El Capitan 22 times, including the second ascent of El Cap’s hardest line, the Reticent Wall.

Mark has written about mountaineering (his book “Baffin Island: Climbing, Trekking, Skiing” was published in 2008), the environment, history, disappearing cultures and more, but his new book, “The Impossible Climb: Alex Honnold, El Capitan and the Climbing Life”, tells an insider portrait of the climbing community and the story of his ten-year friendship with Alex Honnold, which climaxes with Honnold’s free solo of El Capitan in Yosemite. Today Mark is one of National Geographic’s go-to writers for adventure-based stories and his work has also appeared in publications such as Outside, Men’s Journal, Rock and Ice, Climbing.

Mark has also worked extensively in the film and television industry, both in front of and behind the camera. His credits include work for National Geographic Television, NBC Sports, Warren Miller Entertainment, Teton Gravity Research and Red Bull Media House. Long regarded as one of the best storytellers in the business, Mark is highly sought after as a motivational speaker. He presents regularly for clients like General Motors, the Bank of New York, Vanity Fair Corporation, the X Prize Foundation and the National Geographic Society.

Mark is also an IFMGA guide, the the owner and director of one of the premier guide services in the east(Synnott Mountain Guides), and a trainer for the pararescuemen of the US Air Force. He is also a longtime member of the Mountain Rescue Service (MRS) and currently serves on the board of MRS and the Friends of Cathedral Ledge. He lives on a dead-end dirt road in the White Mountains of New Hampshire with his wife and four children.