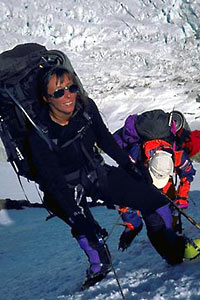 Among the mountaineering elite, K2 is the ultimate challenge. Everest is higher — by just 785 feet — but K2 is steeper, tougher, and deadlier: Everest has been summitted more than 1,300 times, while only 183 men and 5 women have reached K2’s fearsome peak since it was first conquered in 1954, and of those, at least 21 never made it back down. On her first effort in 1998, Howkins became one of the handful of women to attempt the peak. On her second attempt in 2000, she was determined to once again climb this daunting peak alpine-style — without the aid of porters or supplemental oxygen — a feat accomplished by very few mountaineers. She knew the risks as well as anyone…but even her long experience could not prepare her for what happened high on K2’s deadly slopes.  “I have to be ready for whatever challenge I may face,” writes Howkins, a single mother, as she explores the ethics of her passion. “My daughter gives me a desperate kind of strength.”