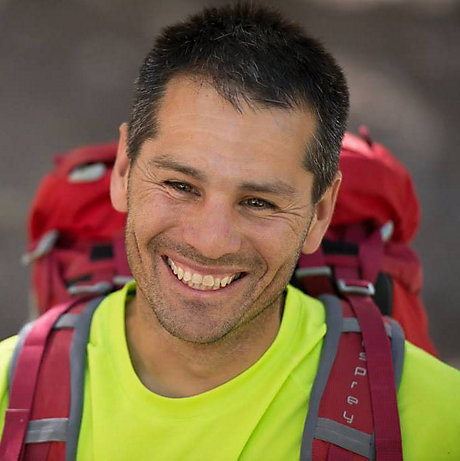 This 41 -year-old American climber has made a goal to be an all around climber. Life for Marcus Garcia was growing up in Fort Worth, Texas, with athletic as his source of an outlet. He’s soon found himself travelling around climbing any where he could for a few years until he found himself living full time in Durango Colorado, where he lives now with his wife and daughter. Marcus took his years of climbing all mediums and now puts it to use as a climbing gym owner and head climbing coach to all ages. He is now taking his mastery of the winter climbing and growing the awareness of ice and mixed climbing to the young and has started a US Youth mixed climbing team, and is the leading persons to bring this sport to North America. He is on the UIAA Board, which is helping to bring this sport to the winter Olympics. He still puts his competitive climbing skills to use, as he still competes in sport, mixed ice climbing and bouldering competition. His quest as a all around climber, has allowed him to be a leading route developer in the areas he has climbed in. Putting up first ascents of all grades, sport, trade, mixed ice on all types of rocks formation. His favorite thing to do is teach climbing. His clinics are love by all those that have taken them at many of the climbing festivals. Marcus Garcia lives by this quote “Dream as if you are going to live forever, live as if you are going to die tomorrow”

Thank you Osprey Packs for sending Marcus to his first Michigan Ice Fest!