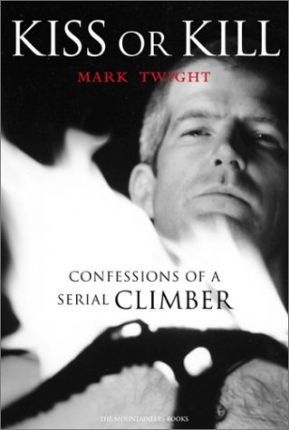 Mark Twight rose to prominence as a mountaineer in the late 1980s and early 1990s with a series of difficult, dangerous alpine climbs in various ranges around the world. His radical, light-weight approach to alpinism has seen him regarded as an influential figure in the single-push movement. In 1988, Twight made the first ascent of “The Reality Bath” on the White Pyramid with Randy Rackliff, which remains unrepeated. The route has been described by Canadian Rockies guidebook author, Albi Sole as “so dangerous as to be of little value except to those suicidally inclined.”

In the Himalayas, Twight attempted more routes than he succeeded on, being turned away by the South Pillar of Nuptse with Jeff Lowe (twice), and shut down 1,200 feet (370 m) below the summit of Nanga Parbat when a storm forced retreat down the Rupal Face (accompanied by Barry Blanchard, Kevin Doyle and Ward Robinson). Other notable Himalayan climbs include the first ascent of the northwest face of Kangtega with Alison Hargreaves, Tom Frost and Jeff Lowe.

Twight made several notable ascents in the Alaska Range. In 1994, he and Scott Backes climbed “Deprivation” on Mount Hunter in 72 hours roundtrip, which halved the previous fastest ascent of the North Buttress. The 39 hours non-stop ascent is considered a landmark moment in the single-push climbing movement. Twight’s participation in this style of climbing culminated with the 60-hour ascent of the Slovak Direct on the south face of Denali in June 2000 with Backes and Steve House.  Twight was nominated for the Piolet d’Or twice during his career, in 1993 for “Beyond Good and Evil” and 1995 for “Deprivation”.

On February 25, 2017 Twight received the Robert and Miriam Underhill Award from the American Alpine Club.