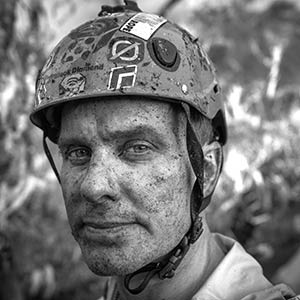 Mike Libecki has infinite passions: Two of them are obeying his obsession/addiction to exploring the most remote, exotic and untouched locations on the planet to climb big walls, towers, or alpine first ascents, traverses and other mysterious adventures (most of them solo), and being a dedicated father to his angel-daughter (he has won Father of the Year Award more than once). Libecki has planned and succeeded on over 55 expeditions and established multiple first ascents in such areas as Afghanistan, Antarctica, Baffin Island, Guyana, Greenland, China, Madagascar, Kyrgysztan, Uzbekistan, Tajikistan, Papua New Guinea, Russia, Venezuela, Yemen, Indonesia, Philippines, Polynesia, Africa, remote exotic islands and even unnamed spots on the globe. More than half of these have been solo expeditions and solo first ascents. He has a several passports with well over 100 stamped pages from around the world. When Mike is not climbing and exploring untouched Earth, he is a stay-at-home father, coaching his daughter’s soccer team for five years, and he just took her on her first expedition to Antarctica (her sixth continent and 11th country). Mike lives near the mouth of Little Cottonwood Canyon in Utah with his daughter, dog, cats, parrot, pot-belly pig, chameleon, chickens and rabbits.