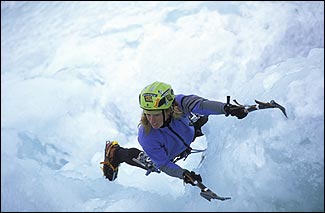 Sue Nott was a native of Vail, Colorado, and began climbing rock and ice at the age of 20. In the winter of 1998, Sue was involved in an ice climbing accident where she was speared by a large piece of ice, when it crumbled from underneath her. Suffering from serious abdominal injuries, Sue took only two months to recover and was out climbing as soon as she could.

Over the next couple of years Sue focused on alpine climbing. She would winter in Chamonix, giving her access to many of Europe’s alpine classics including the famed Eiger. Then spend the spring season in Alaska, climbing on Hunter, Foraker and Denali. All of this was preparation for her major expeditions which took her all over the world, climbing in such locations as India’s Garwhal Himalaya, the Peruvian Andes, and the mountains of Patagonia to name a few.

Sue dreamed big, lived a large life, and wanted you to be a part of it. She was always there to encourage and cheer you on with whatever you were doing, no matter who you were. For those of us lucky enough to share some time with her, we will be forever changed and will forever miss her.