We are so excited to announce that the Michigan Ice Fest now has a Title Sponsor- La Sportiva!  Not only do they make incredible climbing gear and clothing, they were the first climbing manufacturer to come to our event back in the days where there were only a handful of participants at the event.  Back in the early days, Mark Wilford of La Sportiva,  generously donated his time and talents to help build a solid foundation for our festival. This year we think (those early days are a bit hazy) Mark and Sportiva have been involved with the Michigan Ice Fest close to 19 years.  Look for exciting things to happen between Michigan Ice and La Sportiva for years to come!

In the Twenties Thirties and Forties, Narciso Delladio hand-crafted wooden clogs and leather boots for many lumber-jacks and farmers of the Fassa and Fiemme valleys, who trusted his skilled hands. Very important is the date of a participation certificate at the Milan Trade Fair in 1928. During the Second World War, Delladio custom produced mountain boots that were supplied to the Army. Dating back to this period is a patent for a special lacing system, that later will be used by the most important footwear factories. 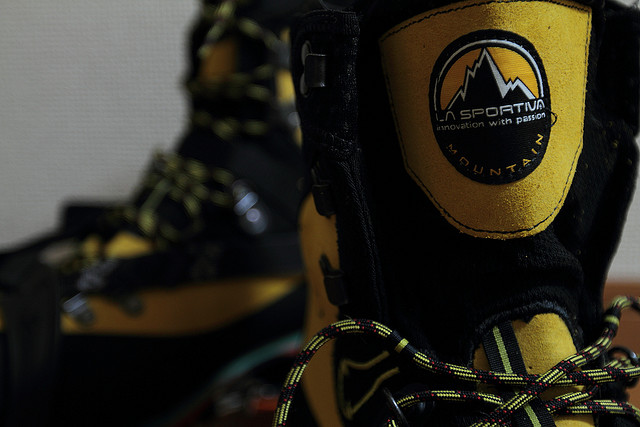 After the war, the demand for boots increased, obliging Narciso to hire new workers: the good name of “Calzoleria Sportiva” crossed the boarders of the valleys and reached the cities of Trento and Bolzano.

In the Fifties, his son Francesco began to work for the company, and by doing the right thing at the right time he started building a new workshop on the outskirts of Tesero, where today is located a large industrial area. In the new and roomy building they began to design and develop ski boots, for a fast growing sport, requiring more technical boots. The market opened up quickly and Francesco Delladio introduced the brand name “La Sportiva” firstly in the Milan Exhibition, then throughout Europe, with a winter collection characterized by audacious technical and aesthetic solutions, and a summer collection of traditional mountain boots.

In the Seventies, with the arrival of plastic boots, “La Sportiva”, after a trial season, had to discontinue the production of ski boots, for financial reasons; the investment would have been too high and therefore the production was limited to mountain boots and cross-country skiing footwear. In the meantime the sons of Francesco began to work in the company: Lorenzo, Luciano, Marco. The desire to create, to stand out and to make a name for oneself in an ever increasing market is a characteristic present in the Delladio family.

During the Eighties  the focus of the firm moves towards the climbing sector due to an intuition which will prove to be a winner. An innovative shoe characterized by the colors purple and yellow was devised and produced to become the forerunner of a long series of avant-garde products, which very quickly will seal the success of the brand name world wide.