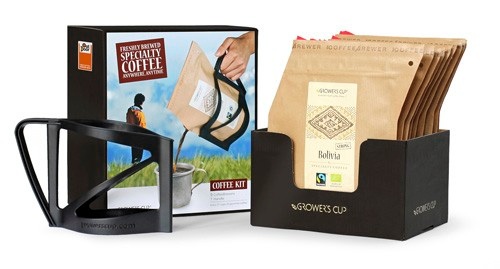 What’s better than a hot cup of coffee after climbing out of your warm sleeping bag on a cold September morning… not much.  For me the fall is about enjoying the colors, and camping under crisp cool skies.  A couple of weeks ago was no exception.  As a regular java drinker I live for the stuff and I’ve always been a French Press kind of guy,  but when the folks at Growers Cup came out with this product it was hard to say no to the simplicity. 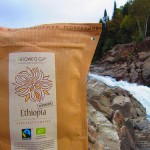 A few weeks ago my girlfriend and I zipped off to Ontario for our annual Canada trip, this time we had some biking and stand up paddling in mind.  After a long day of cruising single track we scoped out a spectacular camp site on the Goulais River and called it a night.  The next morning it was time for a quick and easy breakfast so we could hit the road and get ready for a paddle.  Normally this would involve looking for my pre ground coffee that hopefully hasn’t spilled in my mess kit, putting together my coffee press, and boiling water.  Food is always a second to the java so everything else must wait.  But the guys at Growers Cup made my morning so much easier.

Growers Cup was started an afternoon in 2002, I found out that I had run out of paperfilters for my dripmaker and being pretty annoyed with the situation – I thought, “why isn’t it possible to brew a decent cup of coffee without machines or special brewing equipment…?”  After too many years with research, development of a number of different brewing concepts, tests, thousands of prototypes, and the engineering of new production technology, we are now ready to launch – probably the most innovative and revolutionary coffee concept seen for decades. GROWERS CUP IS BORN!

The Coffeebrewer is basically a hybrid between a filter dripmaker and a French Press.  The design of The Coffeebrewer enables a perfect extraction as the volume of the pouch allows the hot water to interact with the coffee grounds and extract the aroma.The filter is designed to preserve all natural oils and flavours in the coffee. Therefore – a richer taste ! 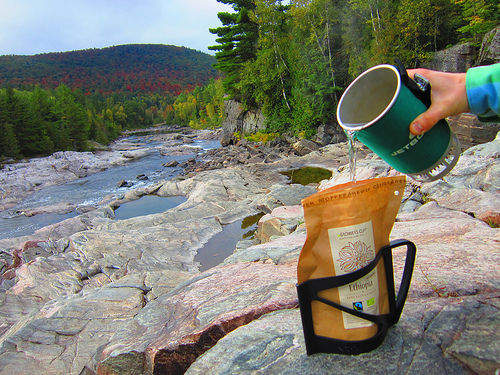 I boil water, pour half a litre (a little over two cups for us Red White and Blues) of boiling water into the bag, seal the bag shut, wait five to eight minutes, and pour.  Presto hot coffee that tastes great!  Best of all the coffee has excellent aroma and flavor, is fair trade, comes in multiple flavors and styles from light to dark, and is super cheap- only $3.50 for roughly three cups of the life brew; that’s cheaper than the sludge at the gas station they try to pass off as coffee.  So next time you hit the backcountry, head out on a road trip, or just need a pick me up with no baristas nearby, grab a pouch from Growers Cup that will make your day that much better. 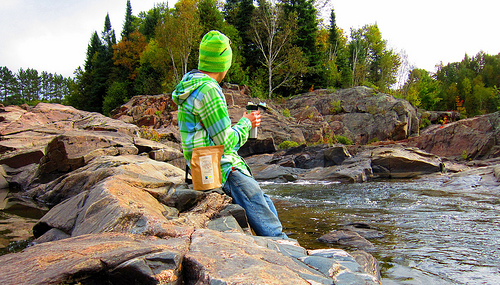 Nic is an all-around outdoorsman. Don’t expect to find this guy inside(except when he is working of course). He enjoys hiking, mountain biking, kayaking, climbing, camping, snowboarding and basically any other extreme sport. He has traveled all over North America and looks forward to adventures in new places. Nic is also a full-time bicycle commuter so make sure you thank him for minimizing his carbon footprint when you stop in the Marquette shop!