All I Want For Christmas- Slate Islands

“What do you want for Christmas?” For a person who doesn’t really need anything, it can be a difficult question to answer.  Last Christmas I opted for an experience as opposed to a gift as I gave my son a list of 5 trips in which he could choose from for a perfect father/son experience. After researching a bit he chose a stand up paddle trip to Canada’s Slate Islands.

The secluded Slate Islands were formed between 400-800 million years ago when a 3 km-wide meteorite struck the Northern Lake Superior area creating a 32 km (19 miles) wide impact zone. The incredible impact raised a large portion of the land that would later form the archipelago of the Slate Islands. It is this archipelago that offers protected paddling opportunities in the middle of the greatest freshwater lake in the world! 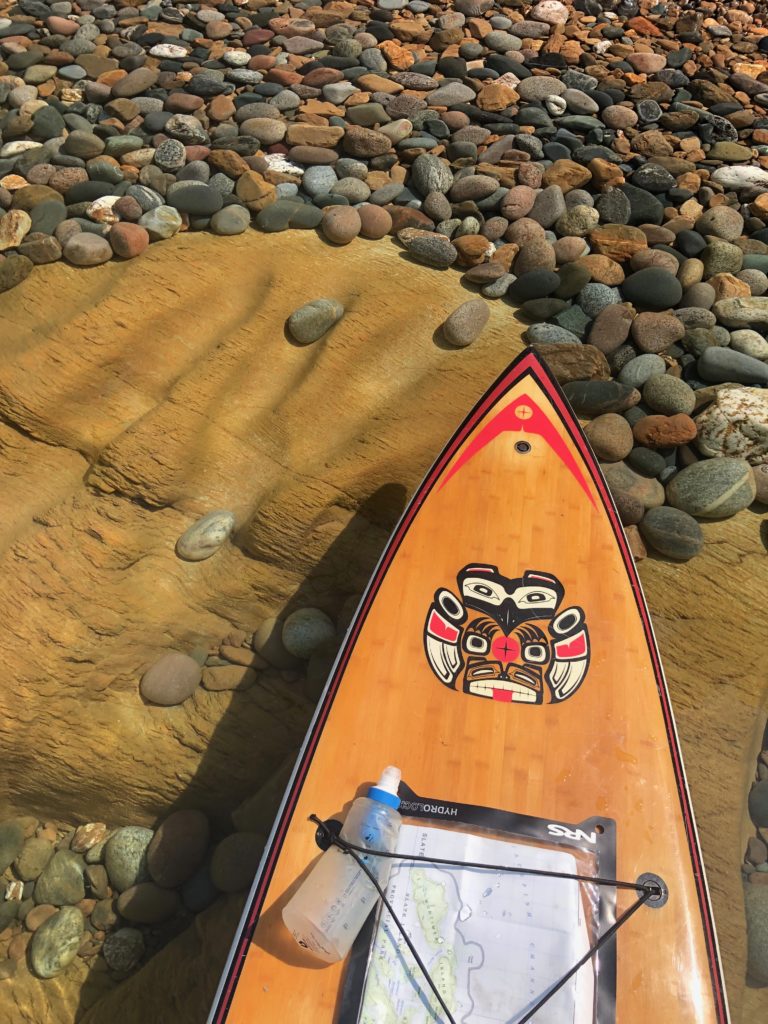 Lake Superior, the mother of all of the Great Lakes, is the largest, coldest, and most pristine.  Its remarkable clarity is due to a low amount of organic material and the crystal clear waters of the Slates is stunning.  Composed of 20 islands, the two largest being Patterson and Mortimer,  protect the inner waters from the common high winds and massive waves that the lake can and often does produce. A Stand Up Board is the perfect vehicle to experience the beauty of this calm clear water. 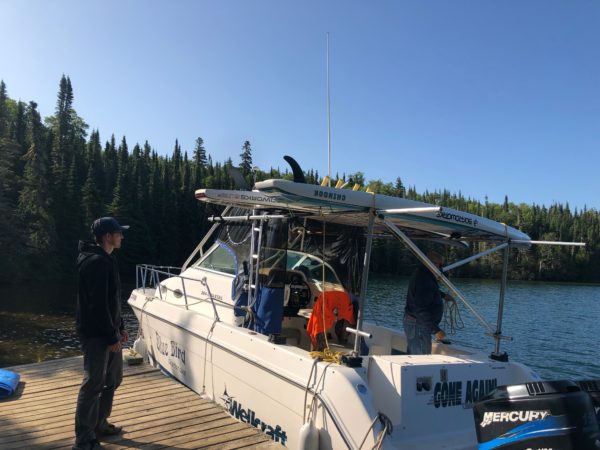 The jumping off point for the Slates is the small town of Terrace Bay where to get to the islands one can paddle the exposed 11 kilometers out to this Provincial Park or you can charter a boat. Due to the long distance and the unpredictability of Lake Superior, we chose Captain Côme Castonguay of Blue Bird Charters. Côme, an enthusiastic French Canadian, was as excited to take us out as he was his first clients many years ago.  He exclaimed “The Slates are just like a Caribbean vacation with emerald green water…..just much colder hahaha!” 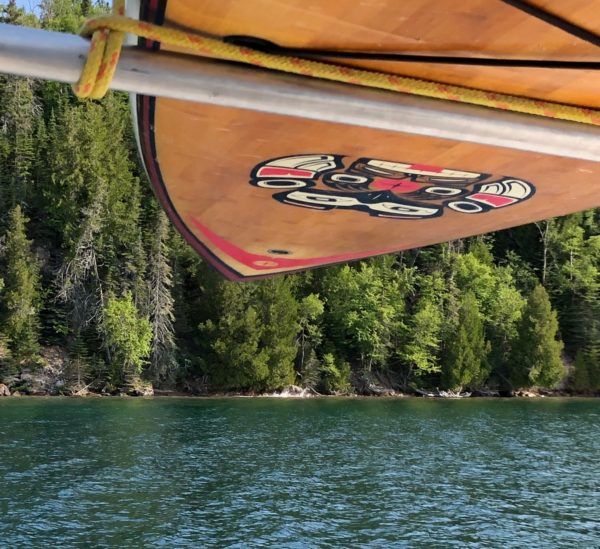 A Bull Caribou running the shores of Mortimer Island

The Slates are home to largest concentration of woodland caribou in Ontario. The woodland caribou are the largest of the caribou species, and have smaller antlers which make it easier to travel in the heavily forrested areas like the Slates.  The caribou which crossed over on an ice bridge to escape predators in the early 1900’s, reached the highest population density in the world on the islands before the 1990s, with the herd estimated at 650 animals. Similar to Isle Royale, wolves reached the archipelago in the early 1990s preying heavily on the caribou but for some reason they disappeared a few years later. More recently, wolves crossed  again and only between two and four males remained into early January, 2018, with no signs of calves or females. In early 2018, in an attempt to save the heard,  the Ministry of Natural Resources and Forestry relocated four caribou from Michipicoten Island to the Slate Islands – one male and seven females. With the low numbers of caribou situated in this unique setting we were very fortunate to spot two bull males from a distance! 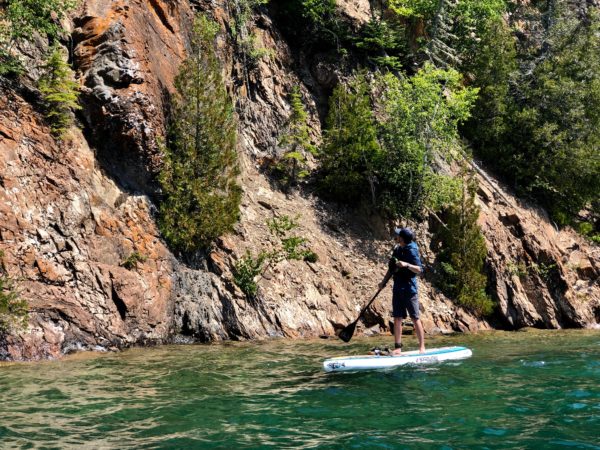 After being dropped off one of our first paddles was to find the Slate Islands Shatter Cone. Shatter cones are rare geological features that are only known to form in the bedrock beneath meteorite impact craters or nucular explosions. The Shatter Cone located in   McGreevy Harbour is reputed to be the worlds largest at 1o meters (33 feet), as opposed to the cones formed by a nucular explosion which measure 6 inches! 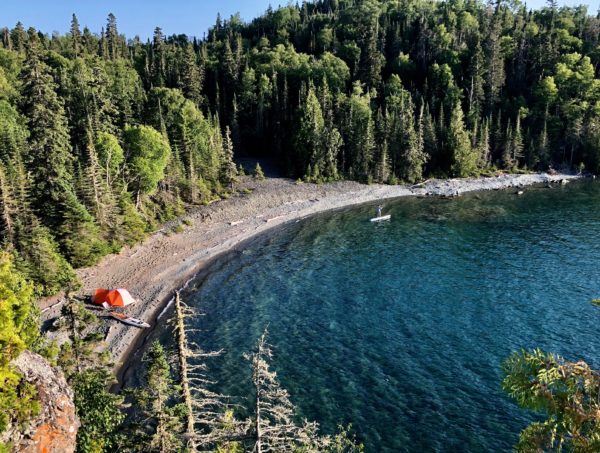 Our seven day trip enabled us to thoroughly explore the Islands and pick out some amazing campsites. There are no provincially marked campsites or services but there are several camping sites that have been established by locals over the years. Our favorites tended to be beach sites on the water where you could beach comb, swim or enjoy the spectacular views! 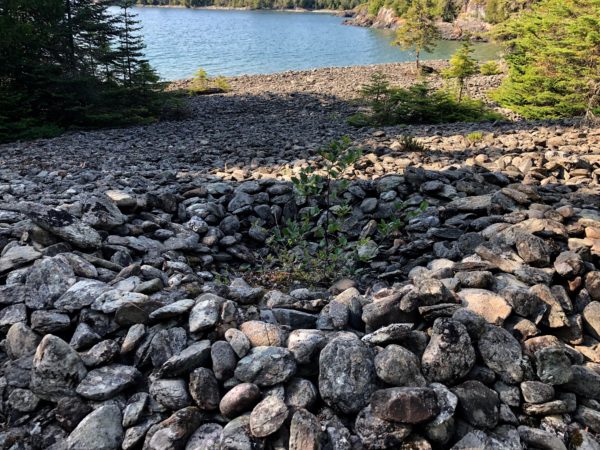 One of our more unique finds while exploring the beach was a “Pukaskwa Pits”. These pits are evidence of early habitation believed to be a thousand years old and created by the original Aboriginal people living in the area. The purpose of these carefully arranged boulders remains a mystery. The cobblestone formations, mounds or depressions may have been used for temporary shelter, storage or for spiritual purposes. It is believed that at least some of the area’s petroforms may have been created by Aboriginal people in 500 BC to AD 1650.

One of the interesting facts about the Slates is that you can find plant life that can normally only be found way up north in the Arctic. The harsh conditions of being islands in the middle of Lake Superior is that only the heartiest of plants/flowers can survive. While hiking can be difficult, we did manage to do some inner island exploring on the caribou trails of Patterson Island where there were numerous colorful flowers and plants to enjoy. 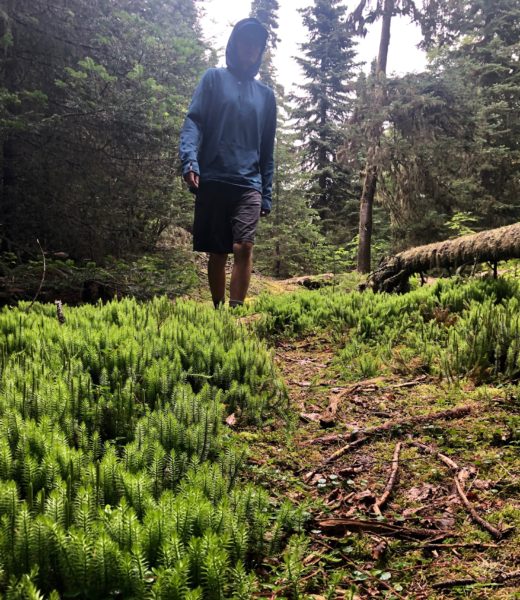 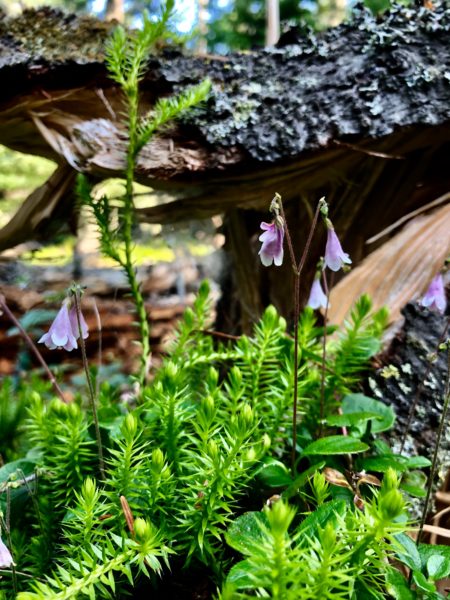 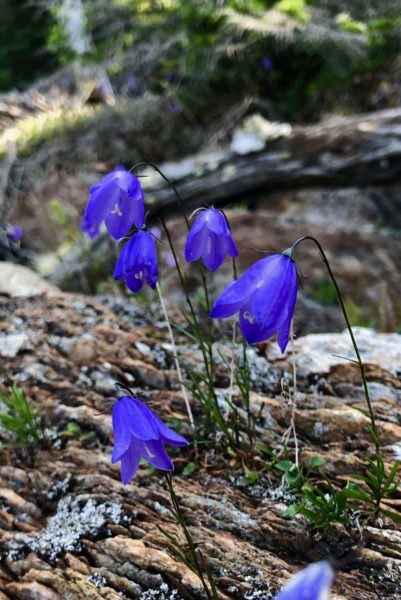 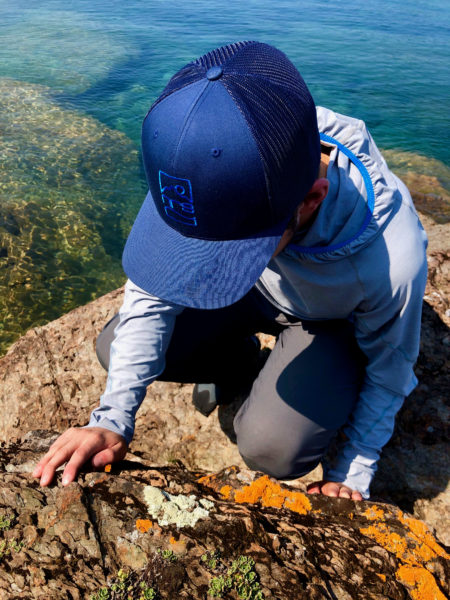 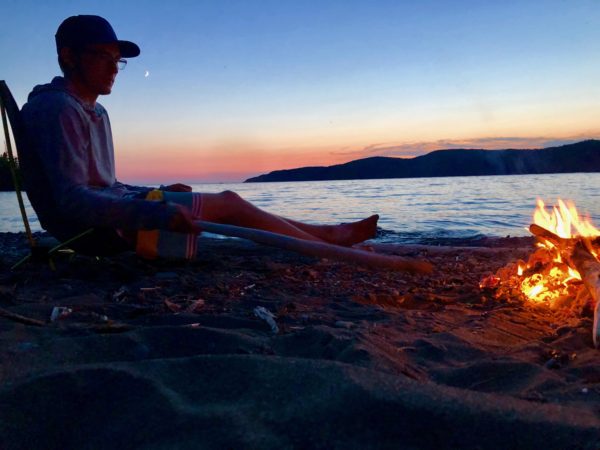 Isolated and uninhabited, the Slates, with its deep channels between the various islands and numerous bays offers the perfect habitat for Lake Trout. Fishing from a stand up board offers a distinct advantage of visually being able to spot the fish, worry free casting, and then once hooking the fish having a natural drag as the trout pull you across the bay! 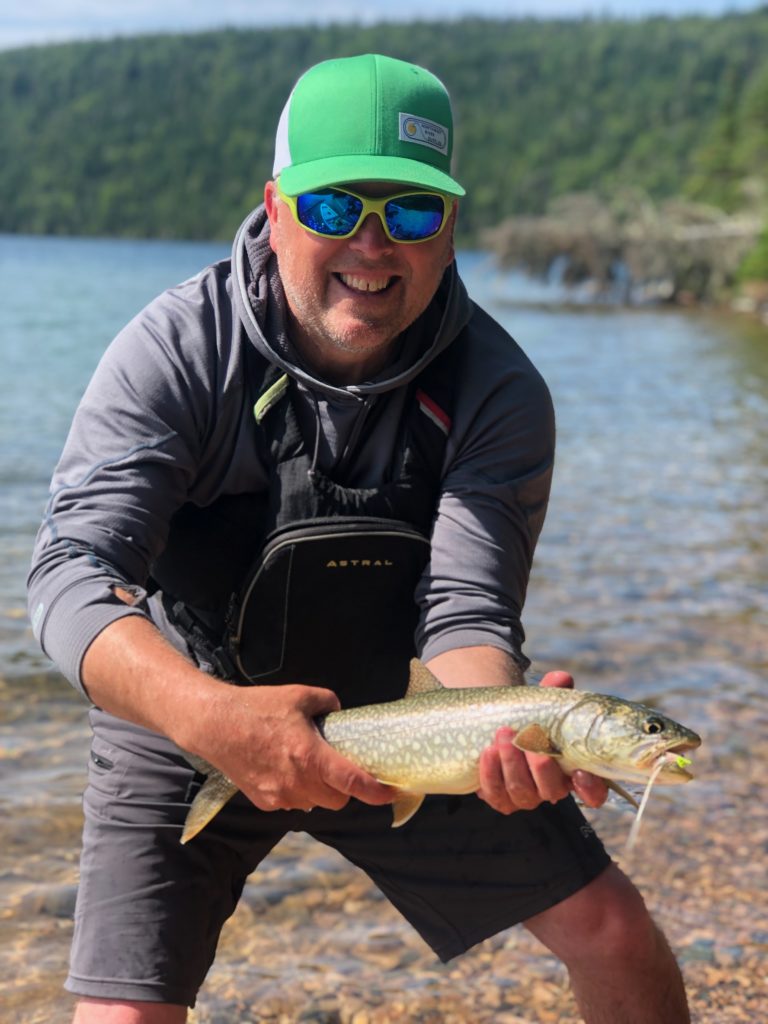 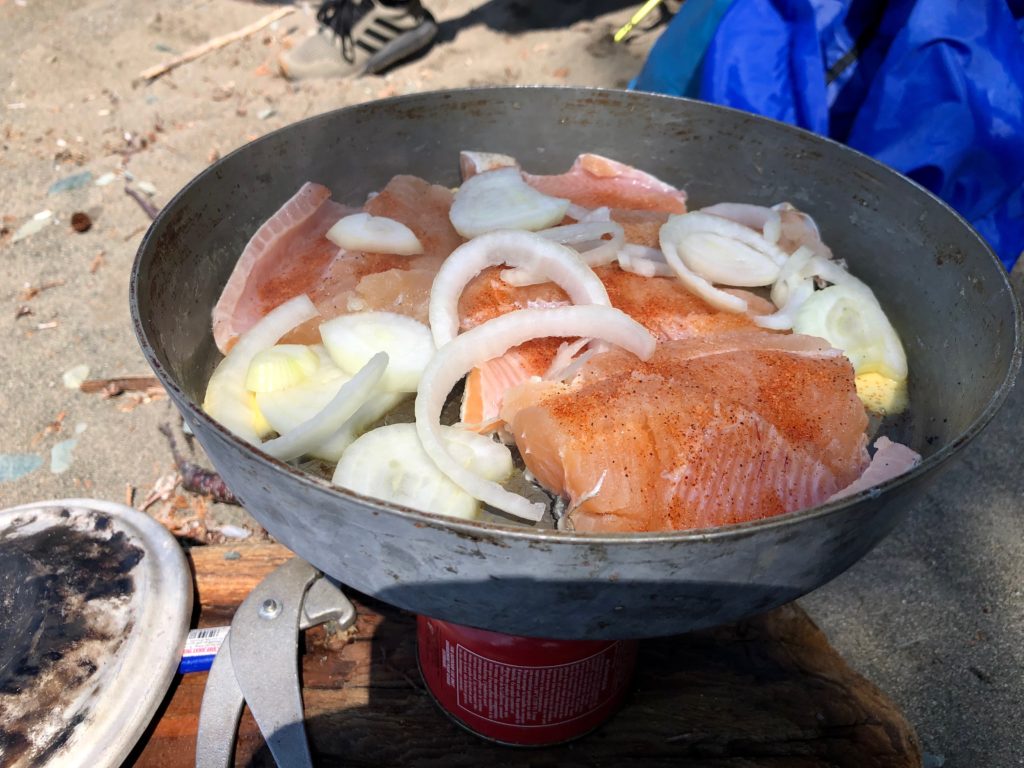 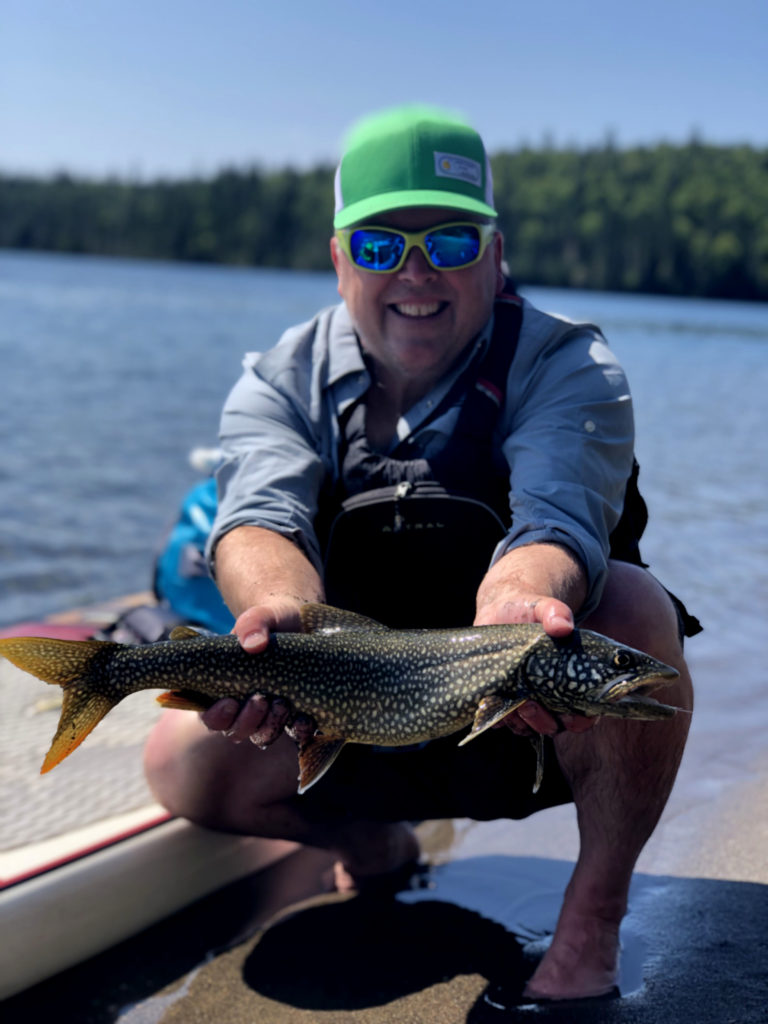 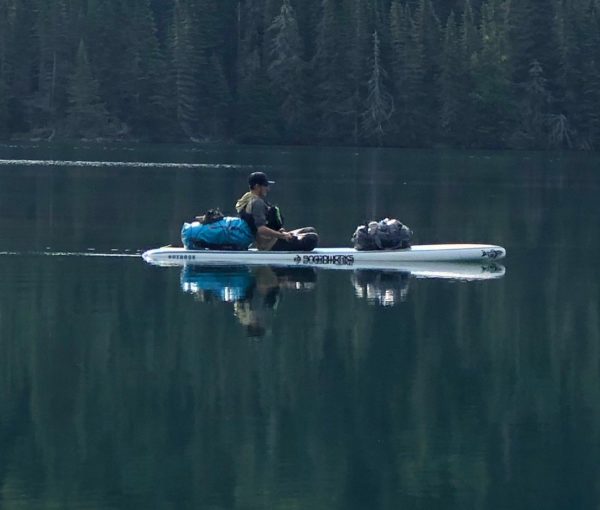 So why stand up boards?  While we encountered very few people on the trip the ones we did seemed to be intrigued on why we would venture out on boards. First of all its pretty simple- a couple of dry bags each secured under the deck bungee cords and you are ready to launch.  We were very pleased with the NRS Bill’s Bag (65l) which we used on the stern of the board.  As much as I would like to think that it would be named after me it’s not, but is named after NRS founder and still president, Bill Parks. In the early 70’s, Bill had a friend who owned a company that made water resistant canvas for tractor trailers (the norm back then.) But as trailers moved to steel construction, this guy found himself with a LOT of surplus material. So a frugal Bill used that material to create the first dry bags for the raft community. Over the years the bags have improved greatly but Bill still deserves all the credit. For our bow bags we both chose the NRS Expedition DriDuffel Dry Bag with a waterproof zipper.  The smaller bag rode well up front and allowed us to attache map cases and fishing rods for easy access. Both bags were super easy to pack and transport from board to camp and back again each morning. With 100l of packing capacity we were able to bring all of the extras along and by no means ever felt burdened with heavy bulky loads.

So what extras did we bring?  Mainly food hahaha! We are strong proponents of playing hard and eating well so many of our meals were made from scratch and if I do say so myself delicious! We love to eat outside, and making tasty meals after a long day of paddling is one of the best ways to end the day. 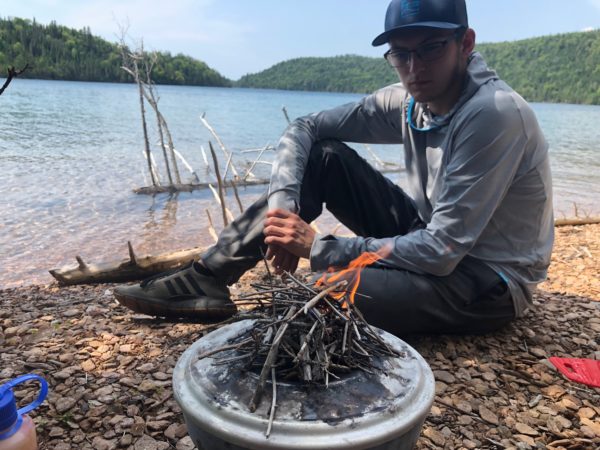 Our cooking tool of choice is the Banks Fry Pan-  an invaluable  lightweight frying pan that’s perfect for cooking, and baking, in the back country. These pans are cleverly constructed with a contoured lid that not only fits tight for baking, but also allows you to strategically place twigs, on the lid when the pan is sitting on your stove, creating the finest baking appliance outside of a professional kitchen! 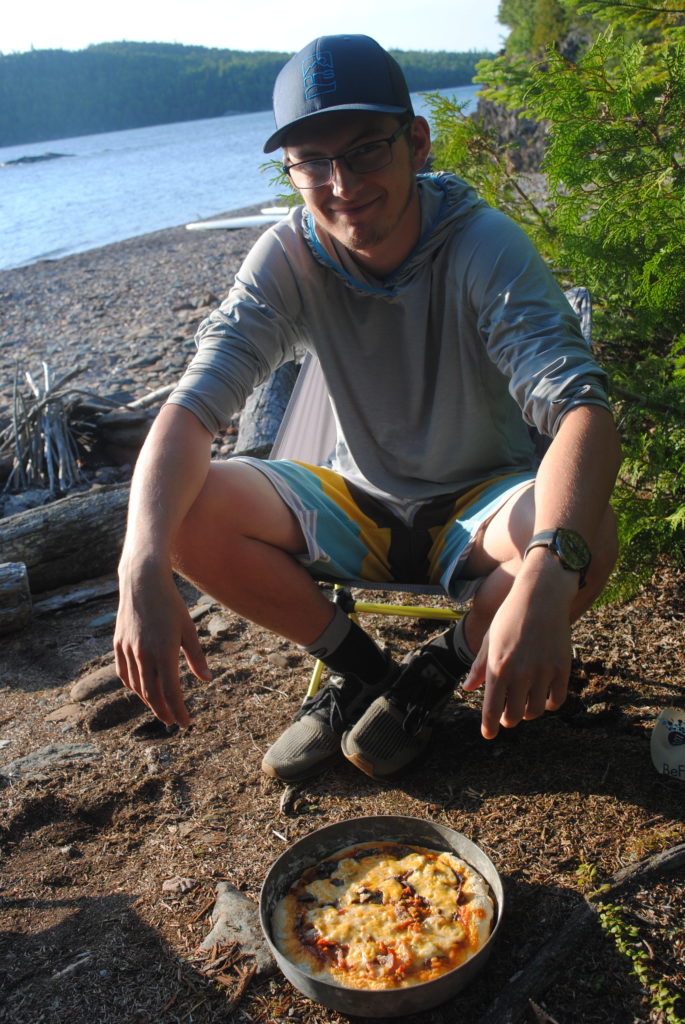 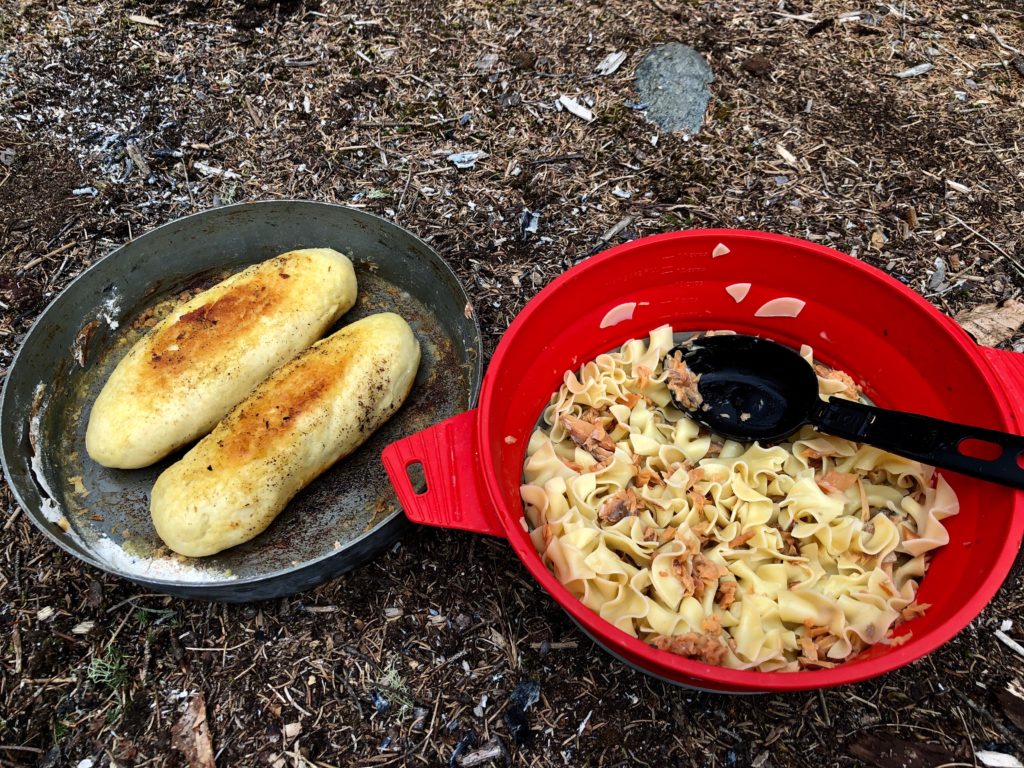 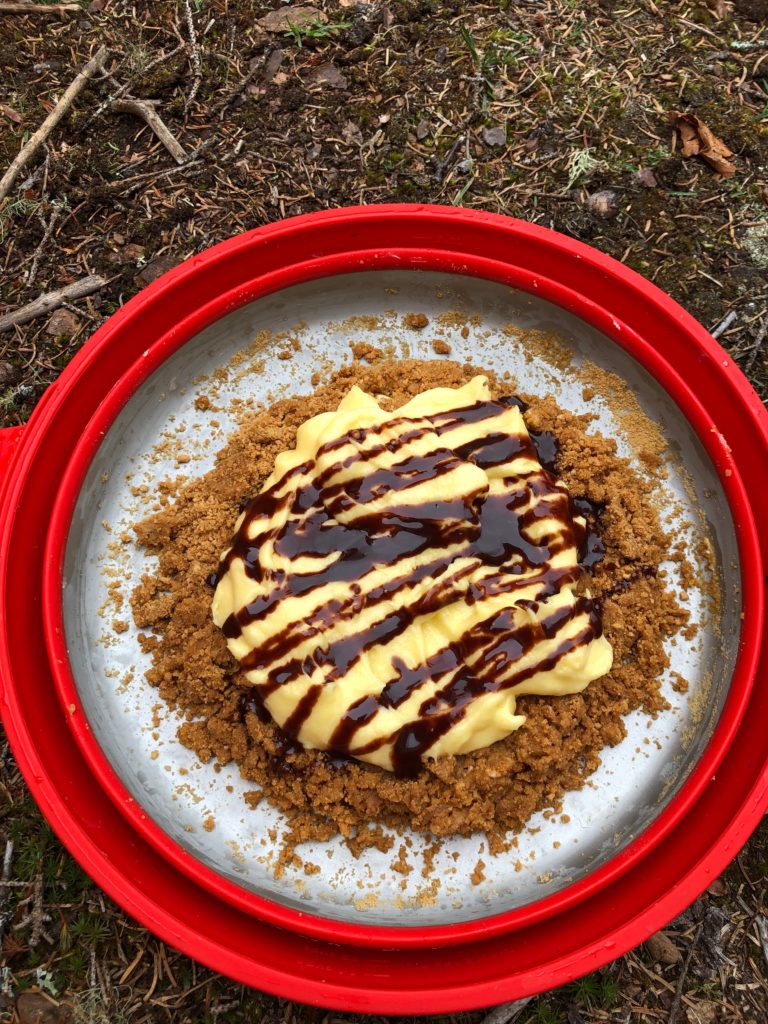 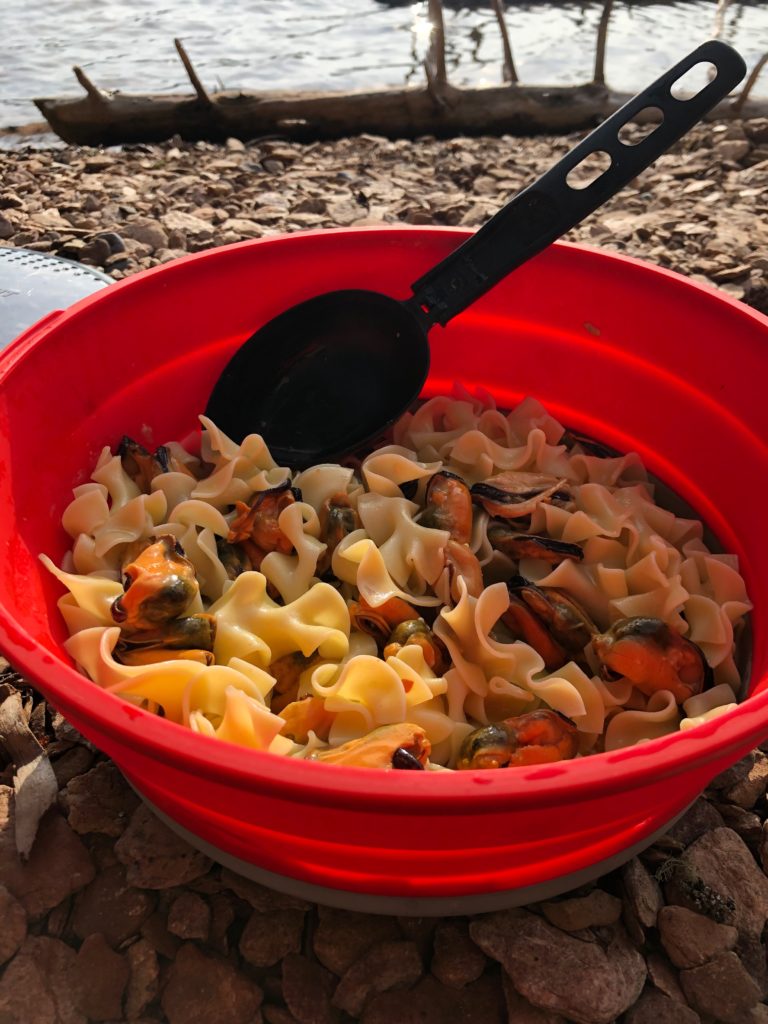 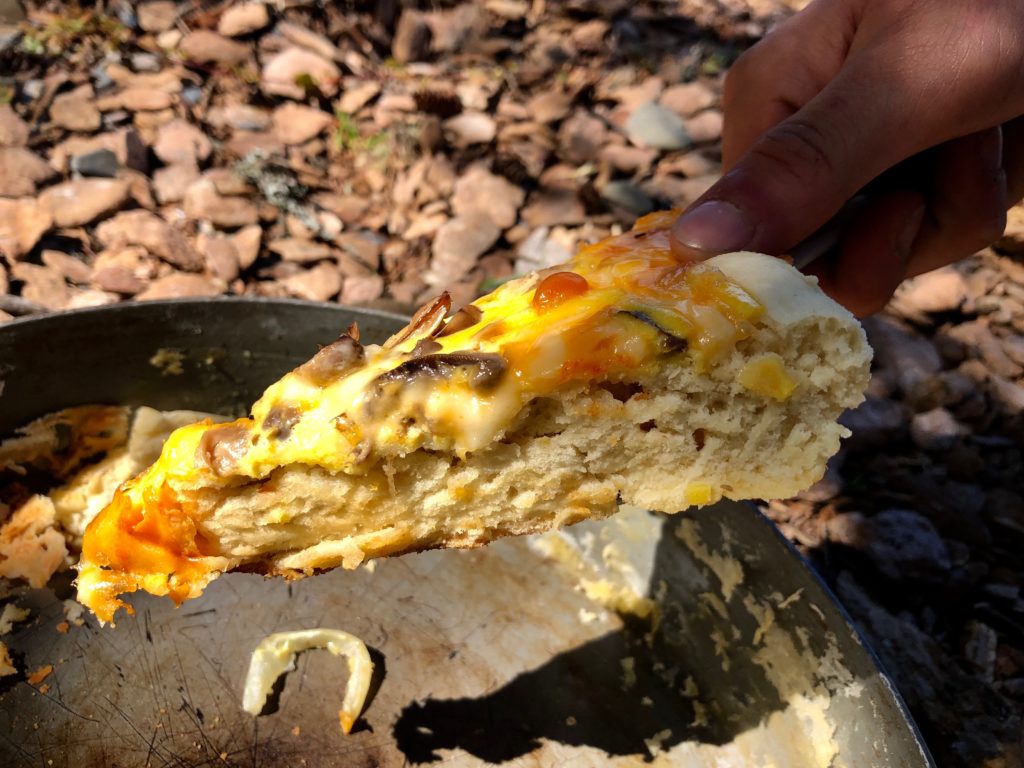 If there is magic on this planet, it is contained in water.” – Loren Eiseley

By far the most enjoyable part of this expedition was the solitude of paddling the quite undisturbed waters of Lake Superior. Every morning and evening we were serenaded by the haunting calls of loons, the lapping of water on the beachfront campsites and the amazing late night views of the Milky Way overhead. 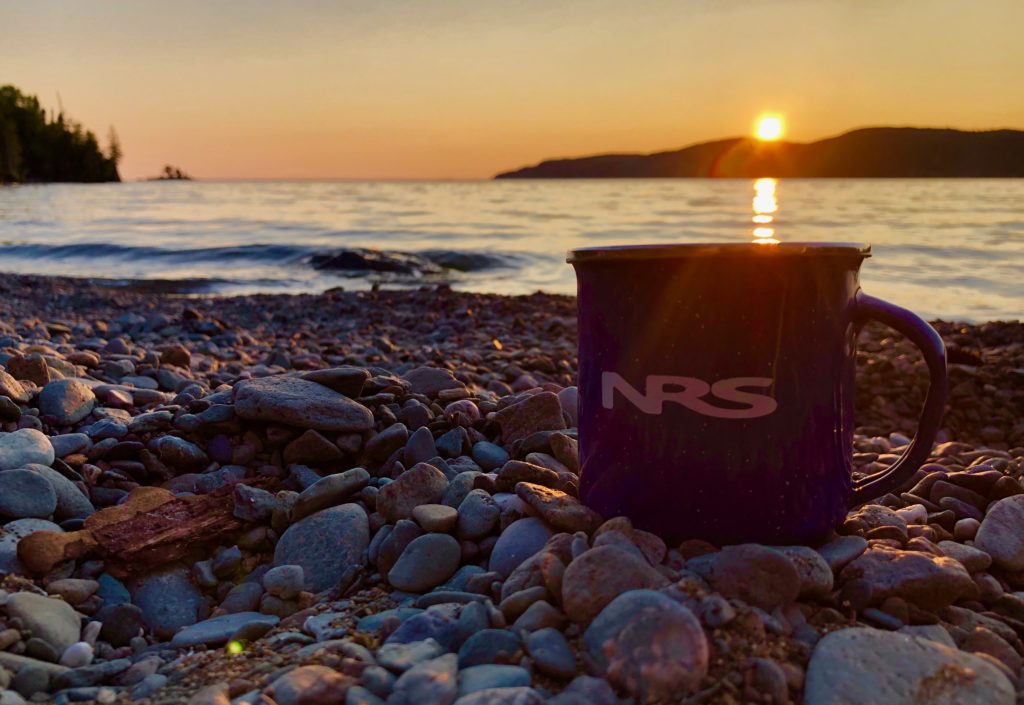 So Christmas came in August this year and I can honestly say I got exactly what I wanted. We enjoyed our “Caribbean Vacation” with beautiful beaches,  waters that were emerald green…..but just a little bit colder. This was a beautiful wilderness experience shared with an adventure partner who like me will not forget what a special place the Slate Islands are.