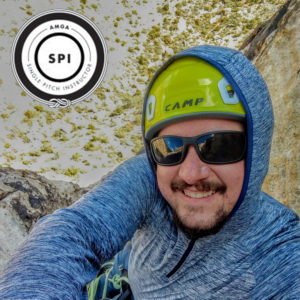 UP native born and raised, Brandon got his start climbing at the age of 17 after being introduced to the sport while working in the Huron mountains. He then spent the following winter learning technique at the local university’s indoor climbing wall. Combined with a life long passion for the outdoors, Brandon took his climbing from Yosemite to the steep south and many places in between. He settled for a few years in Colorado outside Rocky Mountain National Park. In 2005 while living in the Rockies, Brandon was introduced to alpine climbing which led into ice climbing. Returning home to visit in the winter of 2006, Brandon attended the Michigan Ice Fest for the first time and sampled the climbing at Pictured Rocks National Lakeshore.
Today, Brandon is the proud owner of several business that tie in his love for climbing and rope work. He is an arborist (tree climber) at his company North Country Tree Care, a roof access rope technician at his company Roof Rangers, and has been the climbing instructor for the Huron Mountain Club since 2009 to present day. Brandon has always had a love for exploration and developing new climbing routes in the UP. He hopes to share his knowledge of the local geography with future rock and ice climbers.