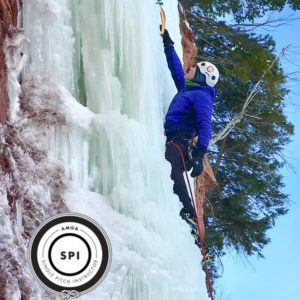 Bryan climbed for the first time at Inside Moves in Grand Rapids, MI while in college at Grand Valley State University during the early 1990’s. He moved to the U.P. in 1995 and never looked back. He claims the Tetons of Wyoming as his home mountain range for climbing and skiing, and escapes to Mexico often for a change of perspective, surfing and spearfishing the mainland’s Pacific coast and the Baja Peninsula. On rest days, he rides single track close to home here in Marquette. Bryan has been guiding climbing since the early 2000’s.

Bryan has been married to his wife Heather for over 20 years and can routinely be found chasing their daughter and son twins, Bailey and Jackson, around their favorite climbing routes, ski descents and waves. Bryan holds a degree in history, English and teaching from GVSU and a Master’s in Administration from Northern Michigan University.