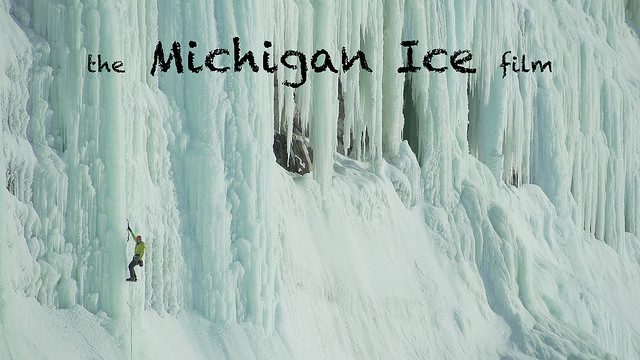 The Michigan Ice Fest and Clear & Cold Cinema are excited to announce that if you are signed up for this years Michigan Ice Fest you will be the first climbers to see the new Michigan Ice Film teaser!   Join us Saturday night as we unveil the teaser for the film that documents the spectacular ice climbing and history that is available in Munising  Michigan.

About the Michigan Ice film:
Michigan Ice is an untold story of ice climbing in the Midwest.  Munising, Michigan on Michigan’s Upper Peninsula is home to one of the largest concentrations of climbable ice in the country, and the nation’s oldest ice climbing festival. Since the early 1980s Midwesterners with mountaineering dreams have cut their teeth on Michigan ice, before venturing out to the alpine world.  This is a story of place, a scrappy, rugged corner of Midwestern flyover land that has earned the respect of climbers like Sam Elias, Kelly Cordes and Mark Wilford but has largely escaped media coverage and industry support. There are no sponsored athletes in Munising, Michigan.  There is one stoplight, 12 taverns—and the world’s largest body of fresh water, Lake Superior.
This is also a story of economics. This region relies on visitors for a significant part of its revenue and winters are a slow, difficult time. Ice climbing is changing that, and as the community embraces a resource that it has long taken for granted, we’re seeing a change in the way the region thinks about itself. A mental shift from frozen wasteland to recreation destination is occurring, and regional pride is growing.
Now a local kid, Ben Erdmann, is redefining speed and toughness from Patagonia to Alaska, while putting up new routes as an unsponsored athlete.  Our story is an introduction to the region’s geology and culture, the history of the sport in this place, and how it has produced an up and coming athlete performing on an international stage.
About Clear & Cold Cinema:
Clear & Cold Cinema is the collaborative production crew of veteran writer, photographer and filmmaker Aaron Peterson. We are dedicated to sharing the stories of the Lake Superior region.  Michigan Ice is our second product. In 2013/2014 we released the 20-min action documentary Cold Rolled tracing the history and culture of winter cycling in Marquette, Michigan that led to creation of the world’s first system of dedicated winter single track for fat bikes. The film,sponsored by Salsa Cycles and regional interests, was a runaway success on the web, was shown at Mountainfilm in Telluride 2014, screened during winter 2014/2015 in partnership with the Banff Mountain film competition and syndicated by Outside Television.  The film, Michigan Ice is due to be released winter 2016.