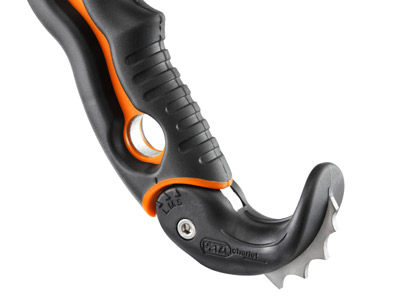 It has come to our attention that the adjustment system of the GRIPREST (the lower hand rest at the bottom of the handle) on the 2010 NOMIC (U21 2) and ERGO (U22) in some cases may not stay fixed in the desired size position.

This issue concerns NOMIC and ERGO ice tools with serial numbers between 10208 and 10329 and all GRIPREST (U21 GR2) accessory parts. It does not concern the new QUARKs or the older versions of the NOMICs, QUARKs and QUARK ERGOs.

Following conversations with end users and extensive lab testing, we have determined that this problem can occur when an inward force is applied to the GRIPREST, damaging the adjustment teeth at the base of the tool’s handle that mesh with the GRIPREST (see photo). Once this damage occurs, users may lose the ability to fix the GRIPREST in the desired size position.  Petzl has developed a solution to reinforce the GRIPREST, which permanently fixes it in the position of your choice (S, M, or L). This procedure will be expedited to reduce any interruption to your climbing season. Because this solution eliminates the ability to adjust the grip’s size, we will replace your tools with redesigned versions of the NOMIC or ERGO once they are available in autumn 2011.

Anyone with a damaged NOMIC or ERGO or who has concerns about the durability of the GRIPREST adjustment system, is encouraged to <span>contact the Petzl America warranty department at returns@petzl.com</span> or the store from which they were purchased for further information about the warranty procedure. You will be provided with directions on what to do next, as well as an estimated time to modify your tools and have them returned to you.

We would like to thank the climbers that alerted us to this issue.    We sincerely apologize for any inconvenience this may cause you, Paul Petzl (President), Romain Lécot (General Manager) and the entire Petzl team

Additional information pertaining to the proper use of GRIPRESTS :

As part of our analysis into the GRIPREST issue, we also came to realize that some people may have

working difficult moves on mixed terrain. The GRIPREST was not intended to be used in this manner and it may break if used in this way.

The strength of the GRIPREST is rated to hold 150daN (equal to 150kg or 330 pounds). When hooking your rope over the GRIPREST a climber can easily surpass this amount due to the physics of the multiplication of force in this system.

For example a person weighing 70kg (154 lbs) will exert twice this amount  (over 140kg / 308 lbs) on the GRIPREST when suspended by a rope hooked over the tool in this manner. When including the additional weight of clothing, boots, climbing gear, and any slight dynamic loading, the total force could exceed the rated strength of this GRIPREST.

The GRIPREST is only designed to support your weight when using the tool in your hands.  Any other usage is forbidden. The grips of these tools include a hole through which you can connect a carabiner for use as a suspension point.