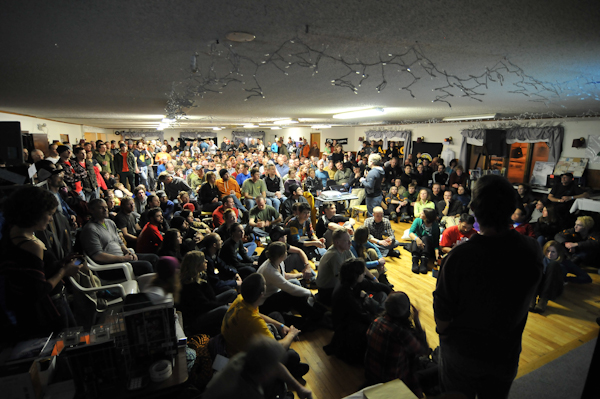 The 2011 Michigan Ice Fest is in the books and turns out it was a record breaking year!  511 participants converged on Munising Michigan to participate in the 28th annual Michigan Ice Fest.  Twelve different states were represented this year with participants traveling as far from Texas and California coming to enjoy banner ice conditions this year.  Almost all of the classic ice formations were in this year and Lake Superior froze over enough to allow the most adventurous climbers to access Grand Island.

New this year, the  Fest started with an Introduction to Ice Course on Friday where participants spent the day learning he tricks of the trade out at the Curtains.  The evenings festivities started off with a climbing social and free beer sponsored by Scarpa and Osprey.  Due to a family illness, Roger Strong was unable to make it to the Fest (but he has promised to come to next years fest), so the evening presentation was provided by Sam Elias.  Sam gave out a shout to his Michigan roots which drew a huge roar from the crowd, and then proceeded to show slides and video of his skiing and climbing exploits around the world.  One thing for sure, after watching the presentation, participants came away with how talented of a climber Sam is!  The rest of the evening you could find people browsing the booths of: 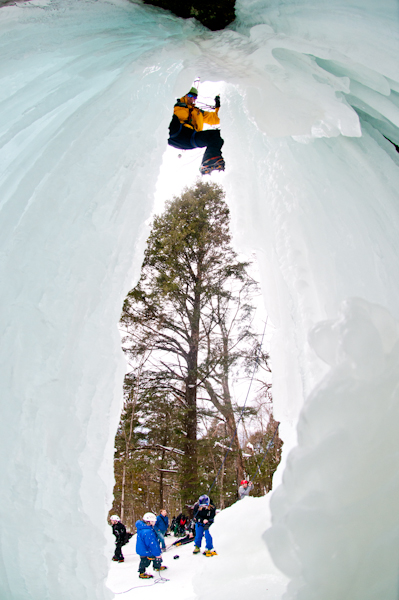 Saturday we got the ball rolling early with equipment hand out for Ice Fest Courses.  As usual, the courses filled up fast and participants were treated to instruction provided by Mark Wilford, Steve House, Sam Elias, Majka Burhardt, and James Loveridge.  After getting the courses set and on their way it was time to hook up participants with demo gear.  This year the line to pick up gear was exceptionally long running down stairs and winding through the restaurant.  Some folks were unable to get gear and we realize that this is an on going problem and yes, next year we are taking steps to alleviate this problem.

The Demo area at the Curtains also saw changes this year with brand new ropes donated to the festival by Sterling Ropes!  Hundreds of climbers were challenged throughout the day with a variety of difficult climbs set up. Also new this year was the Adventure Medical Kits and Jetboil Medical Station.  A big thank you goes out to Peter Richards and Peter Zenti for manning the station all weekend tending to a few nicks and cuts!  Saturday at the Demo we also saw Jim Cantore of the Weather Channel giving ice climbing a shot.  Jim and his crew were at the festival doing a story on winter activities in the Upper Peninsula.  The show should air sometime in April.

After a long day of climbing, everyone converged upon Sydney’s for the Saturday evening social and free beer provided by Down Wind Sports.  With a standing room only crowd, our first presentation of the evening was from Majka Burhardt. Majka beautifully narrated her show of   growing up and her early days of climbing, follwed by her exploits of unexplored sandstone towers in Ethiopia which resulted in her book Vertical Ethiopia: Climbing Toward Possibility in the Horn of Africa, short listed for the Banff Book Award.  Midwest climbers, keep an eye out for her second book, Coffee Story: Ethiopia, which will be released in  spring 2011.

Our final presentation of the evening was from Steve House.  Steve is no stranger to the Michigan Ice Fest as this was his third visit to our festival.  His presentation started out with a dramatic video of him soloing two Classic, hard routes on New Hampshire’s Cathedral Ledge.  With jaws hanging, the audience sat and watched this incredible footage that was shot in February of last year.  The second portion of the show was of Steve and Vince Anderson’s ascent of Nanga Parbat’s infamous Rupal Face,  which is widely considered to be the greatest alpine wall in the world.  And if that wasn’t enough, the show finished off with an account of Steve’s 80 foot fall in the Canadian Rockies while attempting to climb Mt. Temple. The accident left him with multiple life-threatening traumatic injuries which he is still recovering from today.Missed the show?  You can read up on Steve’s exploits by checking out his book  Beyond the Mountain.  The book won the Mountain Literature Award at the Banff Mountain Book Festival and the UK’s Boardman-Tasker Prize. It’s a great read and the book maintains a 5-star rating by it’s readers. 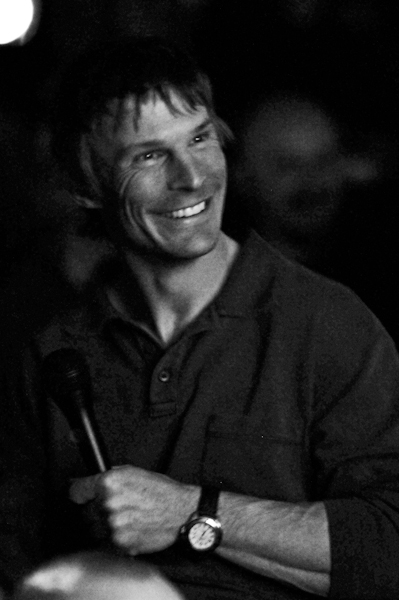 The effects of climbing hard all day Saturday and a late night of socializing must have took it toll on climbers as the demo area was a very laid back all day Sunday allowing climbers their choice of routes all day long.  The additional effect of having the Packers in the Super Bowl also caused our visiting Wisconsin climbers an excuse of bailing out early to prepare for their Super Bowl Parties!

All in all it was another great Michigan Ice Festival and we appreciate all of the patronage we get from Midwest climbers.  We are proud to say that over the weekend we were able to sign up 20 new members to the American Alpine Club, raised $200.00 for the Jeff Lowe movie project and exposed hundreds of first time climbers to the sport of ice climbing. 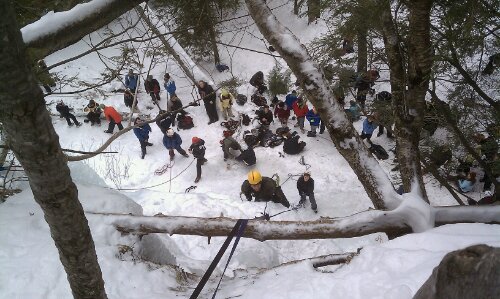